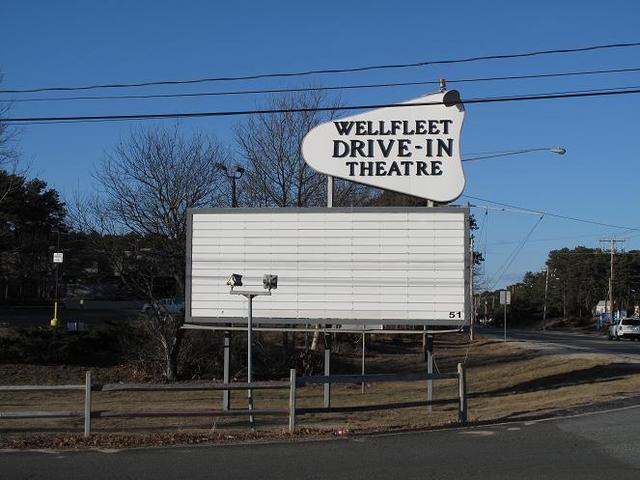 One of the better drive-in theatres on the cape, independently owned, so better service and prices. The Wellfleet Drive-In opened July 3, 1957 with Katherine Hepburn in “Desk Set”. Associated with the adjacent Wellfleet Cinema.

The architect for this theater, as well as almost if not all of the Sack Cinemas, and Sonny and Eddy’s Cinemas, and many independently owned cinemas, was Burt W. Federman. His office was in Park Square (Boston) and he designed or “twinned” literally thousands of cinemas in the New England area. By the 1980’s, he designed many of the Showcase cinemas located in New England and the central atlantic states. He passed away in 1987. He had also developed a soundproofing system for cinemas which had been first used in a mutiplex he had designed in the Bronx.

What a great theatre! I’ve been bike-backpacking in the cape for a few weeks. It’s on Route 6 where inns dot the landscape and it’s a few miles from one of the town’s centers. They have found a niche and a way to stay in business all year round. They have one movie screen as well as a mini-golf course (that’s very subpar, no pun intended), a restaurant, a bar that faces the golf course with ice cream, etc. The adjacent field serves as a weekly flea market, the largest of its kind in the area. The staff are awesome too.

The map shows this in the wrong location. It’s located farther south toward North Eastham, a little south of Gill Road and across the highway from Village Lane.

The Wellfleet is a fabulous drive-in…in fact, a complete drive-in and cinema complex to die for. I’ll post more later, including pictures.

The Welllfleet Drive-In is a single screen drive-in with a car capacity of 700 cars. It is open seasonaby from April thru October.. The Wellfleet Cinema is a four screen. It is independently owned and operated by the Wellfleet Theatres. Both Theatres have made the conversion to digital projection.

Actually Chris1982 I called the recording this year and the drive in closes the 2nd week in September for the season. I was there last year the 3rd week and it had just closed. I was very disappointed.

Use the format 51 US-6, Wellfleet, MA 02667 when using Google Maps or Historic Aerials. The format above does not map properly on either, but the one I just posted does.

The Wellfleet opened on July 3, 1957, with “Desk Set,” starring Katharine Hepburn and Spencer Tracy. It was built by Spring Brook Center Inc., which has owned it ever since.

It wasn’t listed in the 1959 International Motion Picture Almanac. In 1961, its owner shows up as John M. Jentz, and its capacity is (under-?)stated as 200. That was John Macdonald “Don” Jentz, who went from being an instructor at MIT to leading the investment group that built and ran the drive-in. That low number stuck in subsequent IMPA editions, but by 1982 it was up to 600.

Eleanor Hazen managed the Wellfleet for quite a while, but by 2001 it was run by John Vincent, who is now at least part of the ownership group.

According to the Cape Cod Chronicle, it was Charles Zehnder and Don Jentz who opened the Wellfleet in 1957.