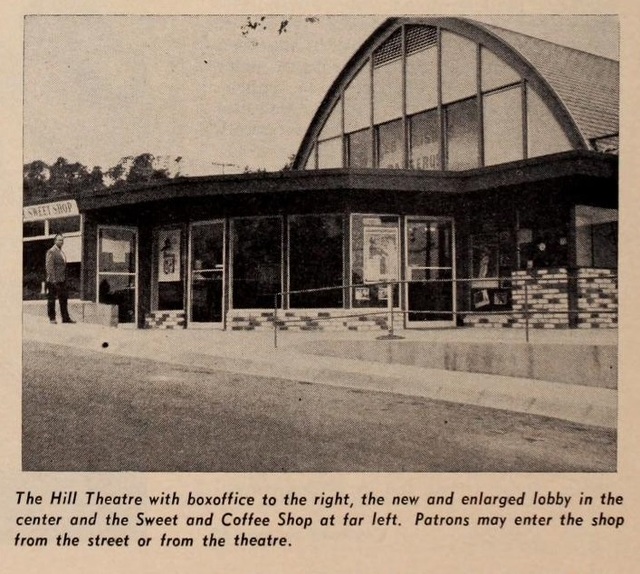 This theatre was built by and operated through the Monterey Theatres Company which was later purchased by United California Theatres and later still UA. The theatre was later sold for retail use.

The Carmel Hill Theatre was built as an art house. The theatre opened in the early-1950’s. While it resembles a quonset hut style, it was not a typical quonset hut structure and was much more substantially constructed.

The structure still stands, having been used for various retail purposes since its art house days ended. The arched building sits at the north end of the Monte Vista shopping center on Soledad Drive.

A photo taken of the theatre’s interior in the early-1950’s, clearly shows a Hammond organ in front of the stage with two Leslie speakers on the floor at each end of what would have been an orchestra pit in an older theatre.

The Carmel Hill Theatre ceased being a theatre decades ago and has been in use for many other businesses including a furniture store and a beauty shop. In 2009, it is a dance studio and ballroom.

As I recall, the Hill closed in the mid-1980s. Though I never attended the Hill (as its name had been shortened to by that time), in its later years under UA operation, I remember the films advertised in the paper as being more generalized firstrun product rather than arthouse fare. I do know that the art film policy was indeed the original, as an article in a trade magazine at the time of the theatre’s opening stated so. Coffee was also originally available in the lobby, in addition to the usual concessions. Illuminated signage was kept very minimal, consisting of “Hill Theatre” in single-tube white neon, mounted to a freestanding steel frame.

My grandmother lived just up the street from the Hill in the mid- to late-fifties. I remember the Hill (and its odd, quonset-hut style building) well, but not because I was allowed to go there. I was just a kid and it was definitely an arthouse – lots of foreign-language films. The one that stands out was “And God Created Woman”, Brigitte Bardot’s big breakout film. It was where I learned the difference between a “theater” and a “theatre” (“theatres” weren’t for kids!). The only time I was ever inside, Mom took Nana to see a German-language film (Nana had spoken German as a child before emigrating to the US). It was serious and subtitled and I was 10 or 12 and was bored out of my skull. Now, of course, it’s exactly what I’d pay to go see!

It was never a family theater – at least not in the ‘50s. When we kids wanted to see “Lady & the Tramp”, Mom had to take us into downtown Monterey or Seaside or somewhere around there.

The Hill was more of a landmark for me; I could tell friends that my Nana lived just past the Hill Theatre. As a kid, what was more important to me was that there was a store near the Hill where I could buy Mad Magazines!

This theater showed X-rated films for much of the 60s and 70s, as I recall. I saw “Kiss of the Spider Woman” there in the 80s. For quite a number of years now the building has functioned as a ballroom dance studio.

The Hill Theatre was not a quonset hut, but a site-built theater using laminated wood arches that formed both walls and roof. They came to a slight peak, giving the auditorium a somewhat Gothic look, though the style of the building was California Modern, a regional variant of the Midcentury style, but which favored the use of natural materials such as redwood and stone along with the glass walls more characteristic of the modern mode. This sometimes gave the California Modern a rather rustic look, as was the case with this theater.

A double-page spread about the Hill Theatre was published in Boxoffice of October 19, 1959, though this was several years after the theater had opened. This article gives the seating capacity of the Hill as 303.

Construction of this theater was to begin in 30 days, according to an item in Boxoffice of July 1, 1950. The backers of the project had arranged for the theater to be operated under lease by R.B. Read and Paul Clark, both of Carmel Point. The as-yet unnamed theater was to show “foreign and domestic films of prestige quality.”

Early in 1956 the Hill Theatre was taken over by a partnership of Maury Schwarz and John Parsons, San Francisco exhibitors. Parsons operated a circuit of several houses in the Bay Area and in the Central Valley. He also operated the Golden Bough Theatre in Monterey from about 1955. Many of his theaters were art houses. After Parsons and Schwarz acquired the house, R.B. Read was to continue as manager of the Hill and take over management of the Golden Bough as well, according to Boxoffice of February 18, 1956.

Linkrot repair: The October 19, 1959, Boxoffice article about the Hill Theatre can now be seen at this link.