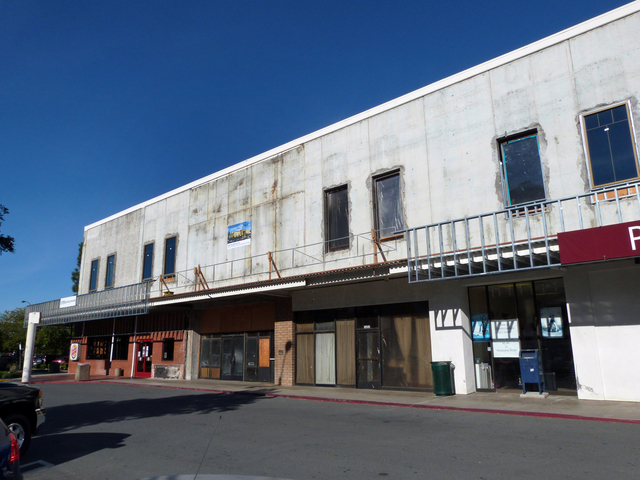 The Capri Theatre was opened May 28, 1969 with Paul Newman in “Winning”. I believe this theatre was on the second floor of a two story building which has since become a church.

I need to contact them to take photos before they do too much to the theatrey-ness of it all.

The Capri Theatre, like other ABC houses of the 1960s and 1970s, was designed by architect Henry George Greene.

Here’s a photo of the former Capri Theatre.

The Capri theater was the second theater in the area where I worked after having come from the Hillcrest theater that later was, unfortunately, renamed Cooper Cinemas. The Hillcrest theatre was closed when the owners, a church organization, wanted to use the facility strictly for their church. I think it remains a church today.

The Capri Theater was owned by Plitt and the manager at the time, Jim, moved over to the Northpoint theater in San Francisco. The owner of the Hillcrest theater operation signed a lease to take over Capri Theater around 1981 or so. I came in to run it, having briefly been at the San Pablo theaters, which were run by the same man. We showed two second run features for $2.00 and offered a large popcorn with refills for about $2.00. It was a great place to work while going to high school because I managed the facility and hired trustworthy friends. Some 30 years later I am still friends with people I met while managing the Capri Theater.

The theater was large and unfortunately the owner, at the time, did not do a great deal to keep it updated and clean. It was sad to see this beautiful theater start to fade and not being able to do anything about it. The owners got rid of the union projectionists and the union janitor was asked to stay under a different contract. That’s when I knew it was time to move on. The owner offered me an opportunity to work at his newly acquired theater, The Park Theater in Lafayette. I would spend about a year there before it was time to move on and head to LA to go to college.

In October 2012 the Harvest Church was renovating the entire building that once housed the Capri Theatre. The Capri sign which remained in place during church use up until that time had finally been removed.

Back in 2005 I had an opportunity to stop by the Park and Shop Shopping Center in Concord, California and paid a visit to the long abandoned Capri theatre. I was surprised to find the front doors to the theatre were unlocked. Upon entering, I found both escalators (located to the right) roped off and no longer operational. The only way up was by staircase (located on the left). Except for one flyer taped to the front door and a large cross propped up in a corner at the top of the staircase, I saw no other signs that a church had become the recent occupier of the Capri theatre. As I made my way down the left corridor towards the front lobby, it seemed as if nothing had changed. The wonderfully dated movie reel designed carpet was still in place as well as the refreshment counter. The only difference I saw was the amount of clutter placed in front of the glass doors in front of the lobby. Large lighting units, sofas and chairs had been left strewed about. I was unable to get any closer to the theatre. The glass doors before the lobby area were locked.

Although I had only attended the Capri theatre a few times in the 1970s (THE MISSOURI BREAKS in May of 1976 and ANNIE HALL in April of 1977) a feeling of nostalgia and sadness came over me as I left the shopping center parking lot.

I was born in San Francisco and lived in Concord from 1970-75. We went to the Capri on a regular basis and then headed over to Loard’s for an ice cream sundae or the International House of Pies. My mom worked at Imperial Savings and Loan; Park and Shop was my favorite hangout. We moved to Canada in ‘75 and I drove down to Concord last year; I felt totally nostalgic for the Concord of '75. (I was glad to see that Round Table Pizza was still there, but my pizza just didn’t taste the same.) Maybe I expected a banner at that shopping center welcoming me back. :=(

Saw a lot of movies when it was a 2nd-run place. A double feature for a dollar! Hard to beat that. When I first went, it was a single screen theater. One side even allowed smoking! Eventually they parsed it into three. Very funky, then. The two smaller screens were located way up the wall, and you had to sit rather close to the main screen. But hey, it was still super cheap! 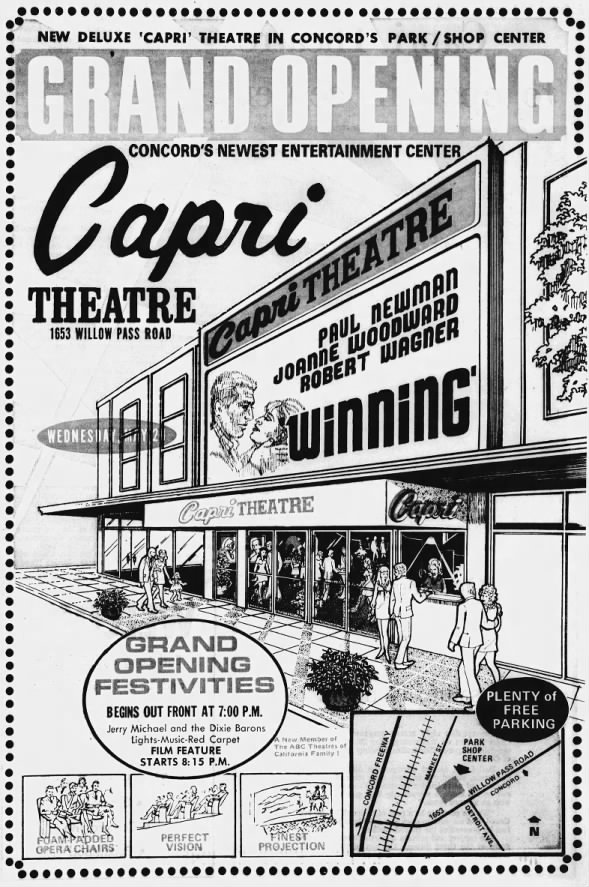