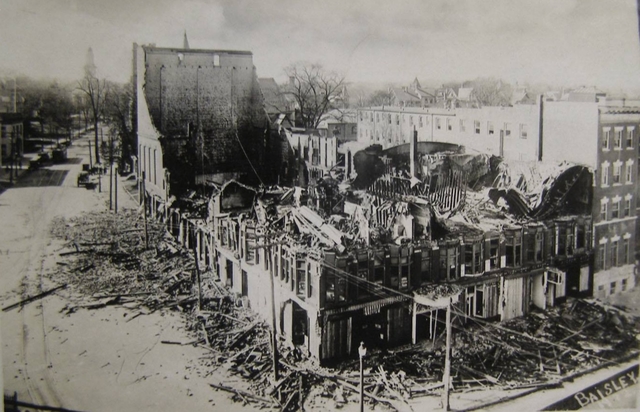 The Taylor Opera House was built by James S. Taylor, according to the book series, “Images of America, Danbury”. He originally solved the problem of felting hats with the Taylor sizing machines (Danbury was the hat capitol of the world) by machinery. He was born in 1825 and was the great-great-great-grandson of Thomas Taylor, an original settler of Danbury.

The success of the Taylor sizing machines which ruled the hatting industry for over 60 years generated the capital that led to construction of the Taylor Opera House. The building, with its unique domed roof, was built in 1870 and opened on July 4, 1871, served as a venue for operas, plays, concerts, motion pictures and high school commencements.

The Opera House was damaged by fire in 1884 and burned to the ground on October 29, 1922. The fire started in the building on Main Street and spread to 15 businesses before it was contained.

The building that was built on the site of the Taylor Opera House, the Pershing Building, was erected in 1923 and is located at the corner of Main and West Streets. It was named for John Joseph Pershing, the general and chief of staff of the U.S. Army. It was the largest commercial building at the time in the country with 35,000 square feet, with 14 stores on ground level and 58 offices in the upper level.

The Taylor Opera house in Danbury is listed in the 1897-98 edition of the Julius Cahn Theatrical Guide, an annual for roadshow producers. The seating capacity is given as 1,250. Ticket prices ranged from 25 cents to 75 cents. The proscenium opening was 25 feet wide x 22 feet high, and the stage was 35 feet deep. The theatre was on the second floor and F.A. Shear was the Mgr. There were 5 members in the house orchestra. The theatre had gas illumination. Local hotels were the Turner, City, Pratt and Windsor. The 1897 population of Danbury is given as 22,000.

Dear Reader,
I am a looking for information about one Robert Jennings who once was a piano player at the Taylor Opera House. He accompagnied silent movies. Later on he became a cameraman using his Akeley camera. He shot the Hindenburg disaster at Lakehurst in 1937. The record breaking of Henry Seagrave with the Sunbeam 1000 car in 1927. Grandma Moses he caught on film. Worked for NBC and had a television business starting in the 40ties. Anybody having any information about him, please contact me at the Dutch Filmmmuseum in Amsterdam, email: hkraan (at) filmmuseum (dot) nl. Thanks in advance!