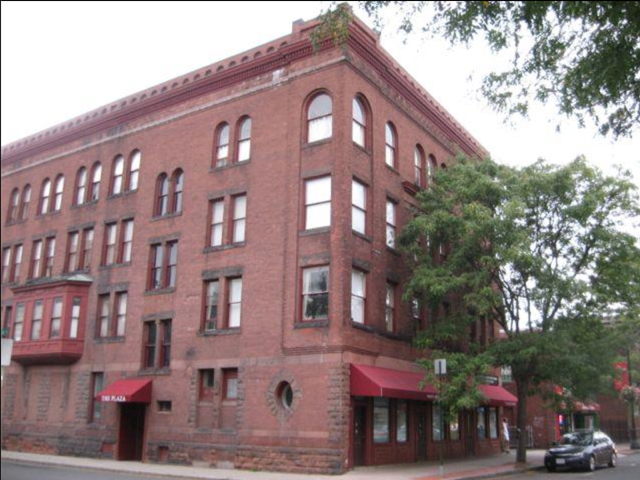 The Plaza Theater was opened in 1912 inside a converted hotel. It was one of the more successful early movie theaters, but eventually closed in 1952.

The nearby and palatial Calvin continued on well past the old Plaza and the Academy of Music also filled the gap left by the theater’s closing.

Today, the Plaza building is occupied by law offices, but has retained its original appearance.

In the early 1980s the Plaza had been long closed, most of the former lobby was a retail store (no original details remained), and the rest of the lobby was an entrance corridor going back to the former inner foyer running along the back of the auditorium. At the north end (the right), was the original staircase upstairs. In front I saw an empty large room with a ceiling that curved downward (the ceiling under the balcony), and a new floor had been put in order the seating area. The staircase went up to the former balcony area which had been converted to offices. Behind the “curbed cailing room” was the rest of the auditorium fairly intact. Windows on either side had been uncovered and you could still see the ornate balcony front with a solid wall about 6 inches behind the balcony railing. The auditorium walls were plain (very old looking) plaster, and the front still showed the proscenium which was made out of fairly restrained ornemanetal pressed tin. The stage was walled off, both of these spaces had been a former dance studio. The cailing was very fancy ornamental plaster in a square classical design. The upper floors (former hotel space) was run-down single-room-occupancy spaces. Around 1983 or 1984, the entire building was renovated with the stage and auditorium being concerted into offices – the main auditorium portion is the law office and the ornamental ceiling was beautifully restored. An oldtimer remembered this as the 2nd run house which also featured saturday matinees, the Calvin being the ritzy place for major movies.

sorry for the mispellings in my message above. I was referring to a “curved ceiling room”, which was the former back portion of the orchestra seating area under the balcony.

Forgot to mention. My estimate from looking around is that the auditorium originally seated about 1,100. Interesting – the auditorium walls had windows in then – looked original and must have simply been curtained off (The building may have been built earlier than 1912). Bowker Auditorium at the University of Massachusetts in Amherst about 10 miles east also has windows along the sidewalls, but virtually all of their performances are at night anyway.