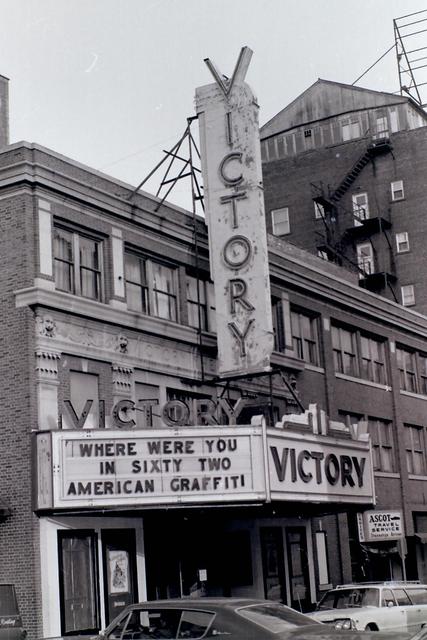 The enormous Victory Theatre opened in 1920 and was one of eight theatres that thrived during the days of vaudeville and silent motion pictures. The Victory Theatre, like many other combination houses, switched to an all-movies format in 1931. It suffered damage by a fire in 1942, but re-opened after renovations and it remained a vibrant movie house until it closed in 1979.

In 1983, Helen Casey, organized the Save The Victory Theatre Inc., a non-profit organization, which was created to help reopen the theatre. Despite some great successes at fundraising along the way, little has been done to help rescue the old movie house reopen.

Like Holyoke itself, the Victory Theatre is still struggling to stay alive. The old theatre’s blade sign was removed in 1986 and the marquee was torn down in 1991. Although it has allowed passers-by to better see its sculpted façade, it is a sad reminder that the Victory Theatre has yet to emerge from its doldrums.

In September 2008, ownership of the Victory Theatre was handed over by the city to the Massachusetts International Festival of the Arts, who plan to renovate it as a performing arts center and reopen by the end of 2012. As of April 2016 the MIFA has already raised $22,5000,000 out of the $30,000,000 required for its renovation. A new deadline for a December 2020 reopening has passed.

Nice to be updated on the Victory Theatre!

This project seems unfortunately to be stalled. In an article on the New England Public Radio website dated April 12,2013,the Massachusetts International Festival of the Arts (MIFA)artistic director Donald Sanders says he thinks MIFA could secure funding, complete renovations, and open the theatre in three years.

That pushes the reopening to 2016.

Several months ago I heard that this project was starting to unravel, unfortunately; but I don’t recall what the source of that news was. The people in charge are stalwart types and I hope that they can get back on track.

i walk by here every day on my way back from the gym for the past 2 months here and there i have seen workers going in and there is a dumpster outside. the smell of asbestos when you walk by is unreal even in the winter but i really do hope they are doing good things inside. im afraid its to far gone

I’ll be co-hosting a photo workshop at the Victory Theatre in Holyoke, MA on June 27. The last two workshops we held at the theater sold out pretty quickly so if you’re interested get your tickets soon. A portion of the proceeds raised will be donated to the theater to help the restoration effort. We’ve raised over $1,600 so far this year!

For more information and to purchase tickets: The Victory Theatre: An After the Final Curtain Photography Workshop

Latest update on the renovation effort:

Purchase of 134 Chestnut Street in December 2019, adjacent to stage house - to be used for support space:

The target date of a December 2020 opening has been delayed. The adjacent building, a former funeral parlor, must be demolished so there can be an annex for additional dressing rooms, office space and a loading dock. Estimate is now 46 million dollars for the renovation/restoration.