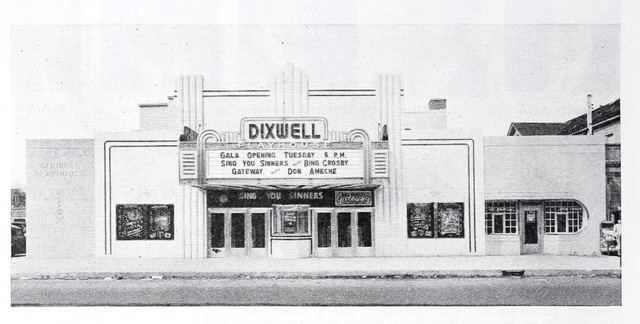 I used to work down the street from it and for a while it housed the CT Associated Press New Haven Bureau in the upper floors and it had a neon sign saying “On the Air” on the outside on the corner of the building. After closing it went to retail use and the building was demolished in 2016.

Trekz – how does one get in touch with you?

If anyone is wanting current pictures of the building let me know. The top of the clamshell stage area is still in tact as well as stage, restrooms and projector room.

Please send them to this page. Or better yet, create a link if possible.

I can be reached at The building is a beatiful and has limitless possibilities for the people and this community but is out of my price range.

I lived in New Haven from 1969 to 1973, and, at one time during that period, probably 1970, I remember attending a movie at a theater on Dixwell Avenue. I could never remember whether it was the “Dixwell ” or “The Strand”. Now, thanks to LOST MEMORY and DJHARRYG, I can finally determind it was THE STRAND! Thanks-even the smallest bit of info can be important to someone!

Here is the Putnam photo that was mentioned in a prior comment:
http://tinyurl.com/37q7mn

I’m looking for a picture of the fish tank mural. !! I used to go to Hamden High School and I walked past the theatre after school to where my boyfriend worked at Radio Shack. I gratuated in 1973. I used to go by and talk to the painters about what they were painting that day. The theatre was painted on 3 sided of the building, so whereever you stood, it was like you were looking thru the tank. The same fish were in the tank, but depending on what side you stood on, you could see the same fish from different angles. I loved the place. I logged on here to see if anyone had a picture of it. If so please email it to me at Thanks Sher

A book published in 1918 titled “A Modern History of New Haven and Eastern New Haven County” says this about a Mr. William H. Wood: “In 1916 he, in partnership with his brother-inlaw, Wm. H. Whitman, erected a fine large modern building at No. 812 Dixwell avenue in Highwood for his drug store and the Dixwell Theater.”

Bing Maps locates 812 Dixwell Avenue across Cherry Ann Street from the Dixwell Theatre, and that lot is the site of some buildings that look to date from before 1916, so I suspect that a renumbering of the lots has taken place, and the 1916 Dixwell was on the same lot as the current Dixwell.

The question then is whether the current Dixwell Theatre is the 1916 house, and it was remodeled in 1938, of if some disaster befell the 1916 theater and it was replaced by an entirely new building in 1938. The bird’s eye view at Bing Maps shows that the bulk of the theater is a brick structure of a type that might have been built in either year, so it provides no answer.

A photo of the vertical sign of the Dixwell Theatre illustrated an ad for Flexlume Electric Displays on this page of Motion Picture News, December 1, 1928.

The Boxoffice article Tinseltoes linked to reveals that the 1939 Dixwell Theatre was a rebuild of the 1916 theater, which had already been expanded from its original 400 seats in 1926, and then severely damaged by a fire in 1938. Parts of the original building were incorporated in the 1939 rebuild.