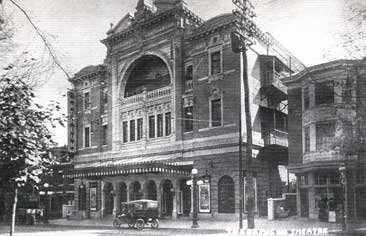 Located in the Germantown section of North Philadelphia on W. Chelten Avenue near Germantown Avenue. The Orpheum Theatre was designed by architect John D. Allen in association with the firm of Sauer & Hahn in 1912. It was opened on October 6, 1913 presenting Keith vaudeville. It had 1,706-seats, with 1,008-seats in the orchestra, 358-seats in the first balcony, 300-seats in the second balcony and 40-seats in boxes. It was equipped with a Kimball organ.

Movies were added to the program in 1915. In 1929 it began playing movies only. By 1941 it was operated by Warner Bros. Circuit Management Corp. In the 1950’s stage shows returned with concerts by Frankie Avalon & Bobby Darin. The Orpheum Theatre was closed on July 28, 1966 with Terence Stamp in “Modesty Blaise” & James Stewart in “Flight of the Phoenix”. It was demolished in 1967.

This was the â€œgrande dameâ€ of Germantownâ€™s theatres. It truly was a gem in its day, very opulent and elegant. It opened as a vaudeville house with a deep stage that could (and was) used for stage productions and concerts. It was also used to show films. By the 1930s, Â½ of the time it was used to show films. By the 1950s, except for an occasional concert, it was used mostly as a movie house. It closed and was demolished in 1967. Retail stores are now on the site of the old Orpheum.

Here is a link to thumbnail view of the old Orpheum. I have a picture of it and will upload it when I can.

Located at 42 West Chelten Avenue, this was an architectural gem, inside and out, and contained very intricate and elaborate detailing. It was a very elegant and oppulant theatre in its day. Records found indicate the Orpheum had a seating capacity of 1,706, but early records indicate that it had a early seating capacity of over 2,000. Built in 1913 as a vaudeville house, it was also used for stage productions, concerts and films. It had a deep stage, large orchestra pit, a large organ, numerous dressing rooms behind the stage, a balcony and individial boxes on both sides of the auditorium. The auditorium was elaborately decorated and had a muraled ceiling. The elegant main lobby was chandeliered and gilded. It had grand stairways on either side of the main lobby leading to the second floor lobby. This was also a grand lobby, just outside the balcony area and had a large picture window that overlooked bustling Chelten Avenue.

It is said that, back in the early days of the Orpheum, 15,000 to 20,000 people a day attended Germantown’s various theatres. This being their main source of entertainment. Admission to the Orpheum back in its beginning daysa was just 5 or 10 cents and their program changed daily. As vaudeville died out, the Orpheum became more of a movie theatre, but still presented stage productions, big band and other concerts through the 1940s. By the 1950s, the Orpheum was used solely as a movie theatre. Like other independent theatres in Philadelphia and around the country, the Orpheum fell victim to the growing popularity of television. Another factor in its demise is the decline of the once-bustling commercial district of Germantown & Chelten Avenues. Throw in the high costs of maintaining such a large theatre as the Orpheum, the death-knell was evident. It closed in 1967 and was demolished to make way for some retail stores.

This was one the only one of Germantown’s theatres that I was in, yet remember so little of it. I just didn’t appreciate at the time the architecture gems that were were these old theatres.

The Orpheum was the “grande dame” of Germantown’s theatres. But, Germantown and the surrounding area had many more theatres and several huge theatres planned, but never built. To summ, Germantown had 10 theatres – the Orpheum, the Walton, the Chelten, the Allen, The Lyric (aka the Manheim and the New Lyric), the Colonial (aka the Nixon Colonial), the Vernon (aka the Germantown), the Bandbox, the Vernon Palace (short-lived) and the Wayne Avenue Theatre. There were 4 additional theatres for the vicinity of Germantown & Chelten, but never built because of the depression. There was a 5th very large movie theatre planned for where Chelten Avenue “bends” (Chelten Ave meets Wister St & Wyncote Ave). This was never built because word leaked out about the intent and local landowners excalated their land prices). Then, when you factor in the Mt. Airy theatres – the Rialto (aka the Tulpehocken), the Upsal (aka the Pelham) and the Segwick, along with Chestnut Hill’s one theatre – the Hill (aka the Bevedere), that is a lot of theatres in and around Germantown. For some, the building still exists, just used for another purpose. But, as theatres, all are just memories and are a part of the history of Germantown.

Earlier, in my response to the Vernon theater, I mentioned being taken to these Germantown theaters in the 40s by my parents. I remember the Orpheum being the most elegant of them all. If I remember correctly, my father would “call ahead” for reserved seats, and we would pick up the tickets at the box office. We would then be ushered down the aisle to our reserved seats. In the 40s and early 50s going to the movies was a big event, and we would always dress up for the occasion — especially when going to some place as fine as the Orpheum. I recently saw a photo of a 1940s movie audience, and all the women were dressed up and the men were all wearing suits and ties. A different world.

I saw my first film, “Babes in Toyland” in the Orpheum when I was just 4 years old. I cried when they tore down this beautiful old theater.

Here is an undated photo:
http://tinyurl.com/nuarcx

I still live a few blocks from the site of the Orpheum and have lived in Germantown most of my life. The loss of that theater in particular, as well as the loss of Germantown shopping district is very painful. In my view it was unnecessary and resulted from very exploitative management by the City. On a cold winter’s day, when you were waiting in line, there was so much heat from the many light bulbs under the marquee that it kept you warm.

Here are links to photos of the Orpheum in the 1960s:

The Orpheum’s construction was shrouded in legal issues. The construction process had begun in 1910. Nixon-Nirdlinger Circuit acquired this venue as it was being built in February of 1912. Work was halted until November of 1912 to determine ownership issues. J. Fred Zimmerman opened the long-delayed Orpheum with vaudeville on October 6, 1913. Its address was 42-48 West Chelten and the venue was one of the “Big Three” of Germantown’s theaters. The Orpheum would switch to movies and be run by Stanley-Warner.

The Orpheum closed on July 28, 1966 at end of lease with “Modesty Blaise” and “Flight of the Phoenix.” It was razed shortly thereafter.