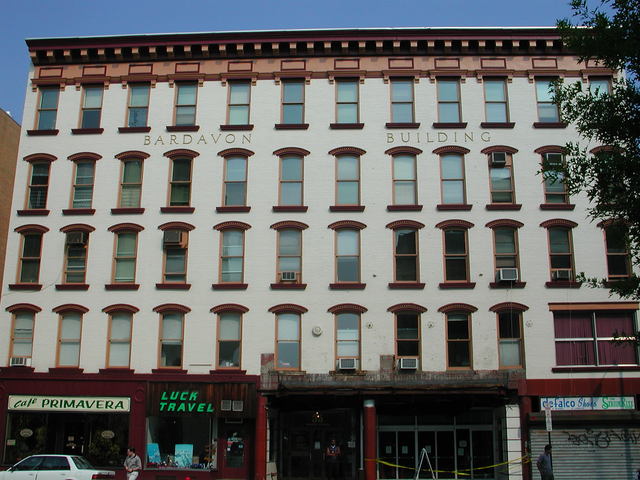 Built in 1869, the Bardavon Opera House, as its name implies, was originally an opera house.

The massive 19th century house was overhauled for film when it was taken over by Paramount in 1923 – a remodeling still evident by its interior appearance.

In 1943, the Bardavon, and the office building in front of it, was purchased by the famed movie studio’s exhibition unit.

In 1947, the theater and its marquee were modernized, and later, the theater was managed by ABC. The Bardavon closed as a movie house in 1975.

About to be demolished to make way for a parking lot, the Dutchess County Arts Council and local residents formed the Concerned Citizens to Save the Bardavon and leased the old theater.

Soon, the Bardavon 1869 Opera House group was formed and a campaign to save the theater began.

The Bardavon was placed on the National Register of Historic Places on August 20, 1977 and returned to showing live productions.

Since 1980, more than $5 million dollars has been spent to restore the theater, and the theater has completed the Marquee and Facade projects entering into a new campaign which will bring about the restoration of the theater auditorium as well as other projects.

In 2003, the Bardavon newsletter stated that the aforementioned mural was commissioned in 1923 and was based on an engraving from “A Midsummer’s Night Dream”:
http://tinyurl.com/5nmkeq

Not really, but I am a Shakespeare fan. I was reading Julius Caesar the other day when I saw the posting for the Bardavon, so that made me wonder about the origin of the name. I would be curious to know if it is pronounced with the emphasis on the first syllable or the second A.

It does. Thanks for the information.

A 1996 view of the Bardavon Theatre in Poughkeepsie.

for Organ Buffs, the Bardavon is one of only a handful of theaters in NY State, still operating with its ORIGINAL Wurlitzer pipe organ in there. Briefly, it was rescued by the New York Theatre Society in 1985 , renovated, re-installed and being used for special events and as part of the Classic Film Series. John Vanderlee Curator

There was a painting on the proscenium depicting Shakespeare sitting on the banks of the Avon. Hence the “Bard of Avon” or Bardavon.

The name is pronounced BAR-duh-von. I grew up in Poughkeepsie in the 1950s. Many fond memories of the Bardavon — also of the Colonial, the Liberty (later renamed the Midtown), the Stratford, the Juliet. All distant memories now, long gone.

The balcony was usually not open unless the orchestra seats were sold out for a blockbuster movie. It was always a treat to be able to go sit up in the balcony.