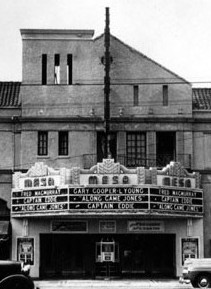 The Mesa Theatre was a classic neighborhood house in the Crenshaw area of Los Angeles.

Opened in 1926 with the MGM film “Mike”, it seated 1,442 patrons. The theater’s proscenium opening was 41'10 wide and 23'10 high. The stage was 29' deep by 72'9 side to side and 52' to grid-iron. The counterbalance was 31 lines and the Mesa Theatre had three Modern and Cooper boarder lights, plus a set of three circuit footlights.

Equipped with a Robert-Morton 2/12 organ, the Mesa Theatre was originally operated by Fox West Coast Theatres and was remodeled during the early-1950’s for CinemaScope and stereo sound. During the renovation, the theatre’s organ cables were cut and the organ grilles were covered over with draperies.

Sadly, this beloved neighborhood house was closed in September 1963. A fire damaged the theatre in 1964 and it was razed the next year.

Lawrence Dews, assistant manager of the Mesa Theater, 5803 Crenshaw Boulevard, suffered burns yesterday when he came into contact with a high-tension wire while attempting to attach a decoration guywire to the roof of the theater. Fellow workmen were unable to release him from the wire, to which he was forced to cling until the power was shut off. He was rushed to Georgia Street Receiving Hospital.

I was a youngster growing up in L.A. (around 1960) and still remember the Mesa well. Local establishments would have free tickets for Saturday matinees of cheapo films like â€œThe Invisible Boyâ€ along with cartoons (to get the kids to buy consessions, I presume). I remember at one of these events the film was stopped midway, the lights came on, and the theatre owner stormed to the front of the theatre, demanding to know who was responsible for throwing something at the screen that resulted in a large gash (naturally no one ‘fessed up—and no, it wasn’t me :–).

This was a beautiful, huge kick-ass movie house. Check the comment by “miketlano” on 9/27/09—i remember that day too! It was major Saturday fun for local kids, plus way rowdy—lots of popcorn box sailing at the screen and candy throwing. But it was also a major first-run movie outlet for everything that came out. My parents loved movies & we’d often go there as a family at night—no candy throwing then. They showed double features w. a cartoon. There were palatial restrooms with lounge couches on the second floor. Sad that it was demolished.

Wow, PM, that is amazing you remember that same day! Would like to see if we have more in common about those days…email me at if interested.

In 1959, my brother was the Assistant Manager at the Mesa. I was 12-years-old at the time and he used to have me help him set the marquee. When I turned 15, I was hired to set the marquee and I did that for 4 years (until I was 19) at which time, I got married and bought a house in Van Nuys. I then set the marquee at the Victory Drive-in.

The Mesa Theater had a row of dressing rooms, in the basement under the stage. One of the rooms was set up with all of the ~15" square plastic letters, arranged in alphabetical order, for setting up the movie manes and the name of the star player was in smaller letters (maybe 9" square). We had a ~10' x 4' platform on wheels that was about 10' high and it was on wheels. I rolled it around in front of the Marqueee every Wednesday evening @ 9:PM. I got $24 for 3 hours work. That was a ton of $ at that time. I have lots of fond memories of that place and the people that I worked with.

An article about Acousti-Celotex, a recently-developed acoustical tile product, appeared in the December 14, 1929, issue of Movie Age, and was illustrated by a photo of the Mesa Theatre’s auditorium.