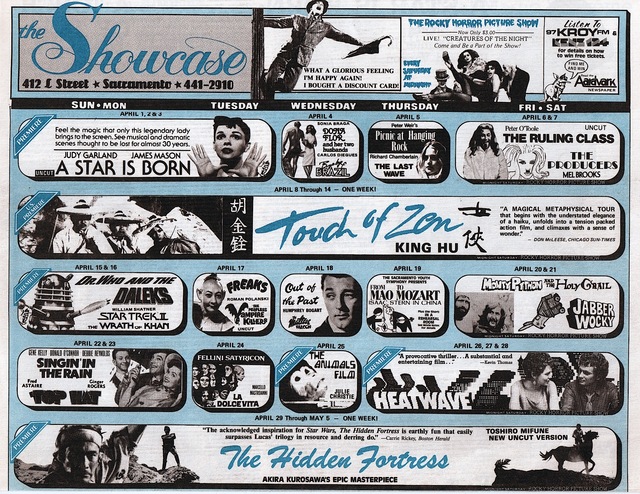 The Lincoln Theatre was opened by 1955 when it had 412-seats. It was enlarged and reopened as the Showcase Theatre on January 7, 1966 with Stewart Whitman in “Those Magnificent Men in Their Flying Machines or How I Flew from London to Paris in 25 hours 11 minutes”. It was closed in 1969 It was reopened by General Cinema Corp. on April 1, 1970 with Mark Frechette in “Zabriskie Point”. By the early-1980’s it was operated by Landmark Theatres. Along with the J Street Cinema, the best place to get an education in film in Sacramento in the 1970’s and early-1980’s.

Yet another good place for samurai movies in the late 70s.

The anonymized comment from 2005 must be wrong about the opening date. Boxoffice Magazine’s issue of January 31, 1966, said that the former Lincoln Theatre was “…attracting good patronage as the bright new 800 seat Showcase.” The remodeling (actually more of a rebuilding, as the floor, back wall, roof and facade were all replaced) had cost $150,000 and had taken ten months. Virtually every appointment in the theater was new, and the rebuilt auditorium featured a stadium seating section at the rear. The architect was Vincent G. Raney, and the decorator was Homer Stertos of San Francisco.

The Lincoln was closed when I moved to Sacramento in 1962 and sat dormant for several years until it was remodeled (more like rebuilt as Joe Vogel says in the above comment) and reopened as the Showcase. It was a first run house for several years and played some exclusive runs of big pictures such as “Those Magnificent Men in Their Flying Machines”. Landmark took over later and ran it as a calendar rep house for several more years. It was a nice, comfortable place to see films that I hated to see close.

I saw CABARET there in its first run.