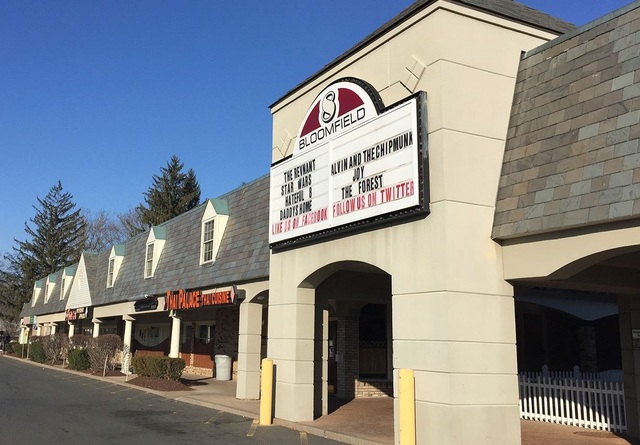 The Bloomfield Cinema 8 is located on Park Avenue at the Wintonbury Mall. It opened June 21, 1996 seating 1,993. The theatre was operated by Entertainment Cinemas playing first run features. The theatre closed in February of 2006.

After renovations had been carried out, it was reopened on April 25, 2008 by locally owned independent operator K & G Theatres. In 2011, it was taken over by Digiplex Destinations. In early-2015 it was taken over by Carmike, then acquired by AMC when they bought Carmike. The theater closed after business on March 13, 2022.

Thanks Brian, but Bloomfield will reopen on Friday April 25 2008.

Nice having a lower priced theatre in the area, but it’s still only good if you see scope films. Still no masking for flat films.

Came here for a movie today. I peeked around a few theaters before my movie, and to my surprise they added side masking to most of their screens. (Including the one I was in #4, which was set at flat and opened to scope before trailers started) Theater 1 and 8 they neglected for some odd reason. Saw that Ice Age on 6 had the curtains set at flat, but in UP in theater 1, it was the old Entertainment Cinemas style flat on scope presentation presentation, with the image in the middle of the screen and nothing around it. They should just program scope movies on these screens seriously.

Conversion Into an All Digital Entertainment Center Coming Soon

BLOOMFIELD, Conn. (March 17, 2011) â€" The Bloomfield 8 theater, located across from Town Hall in the Wintonbury Mall, has begun an estimated $1 million conversion to 3-D digital projection and sound thanks to a recent acquisition by Digital Cinema Destinations Corp. (DCDC), Westfield, N.J. (www.digiplexdest.com). The 22,800 sq. ft. theater with 1,500 seats in eight auditoriums, was purchased from partners Dean Gentile and Tim Keefner for an undisclosed sum.
The acquisition of the Bloomfield theater was announced today by digital theater entrepreneur A. Dale â€œBudâ€ Mayo, chairman and CEO of Digital Cinema Destinations Corp. The Bloomfield 8 is the third theater acquired by the company which began operation on Dec. 31, 2010, the day Mayo acquired in-town theaters in Westfield and Cranford, N.J. All three Digiplex Destinations theaters will serve as the foundation of a chain of all-digital theaters that Mayoâ€™s team plans to open nationwide.
Former Bloomfield 8 co-owner Dean Gentile, a resident of New City, N.Y., becomes Regional Vice President of Operations for DCDC working out of the companyâ€™s New Jersey headquarters in Westfield. His former partner, Tim Keefner, a resident of Stratford, Conn., has also joined DCDC as General Manager of the Bloomfield 8 theater, with responsibilities to spearhead further expansion of DCDCâ€™s Digiplex Destinations theaters in New England. Both were former executives of Crown Theaters based in Norwalk, Conn.
The conversion to digital will also include new seating, carpeting, repainted interiors and a digital sound system. Once completed, staffing at the theater will remain at about 20 full- and part-time employees.
When the digital conversion is completed later this year, patrons visiting the all-digital Bloomfield 8 will notice a brighter, crisper, clearer scratch-free image. For the first time in the theaterâ€™s 15-year history, 3-D movies such as the blockbuster hit Avatar can be shown. Digital conversion will allow the Bloomfield 8 theater to become a center for special event programming delivered by high definition satellite, such as pop concerts, live sports events and auctions, motivational talks, religious ceremonies, and childrenâ€™s series, thus allowing the theater to fill more seats during off-peak periods.
The first Digiplex Destination event will be Kidtoons Family Matinees on April 9 and 10 featuring free G-rated movies. On the schedule will be: April 9, Candyland: The Great Lollipop Adventure, and The Little Engine That Could; April 10, Tonka Tough Truck and Barbie: A Fairy Secret. After Apr. 10, the Kidtoons Family Matinees will be priced at $3.50 per person.
Digital conversion is also environmentally-friendly: for decades, Hollywood films would arrive in 70 pound cans shipped by air, truck and courier, consuming fuel and up to $1 million per film in distribution costs. With digital projection, movies arrive by satellite or paperback book-sized hard drive thatâ€™s downloaded into a digital projector, one for each auditorium. It takes only minutes to prepare a digital movie for showing, versus one to two hours to spool six reels of film onto a platter, thread it into a projector, then respool it for return shipment at the end of the run.
DCDCâ€™s Bud Mayo says, â€œIn a digital theater, the audience will be totally immersed in the experience. They will be able to text back questions and comments, sing along, host tailgate parties outside, even perform skits to accompany the program, as appropriate.

â€œCorporate and professional groups will save time, and consume less energy and money using Digiplex Destination theaters as a meeting place.â€
Mayo continues, â€œDigital technology allows us to redefine what it means to go to a movie theater.â€
For more information on the Bloomfield 8 and DCDC, log onto www.digiplexdest.com

The Bloomfield 8 was recently acquired by the Digiplex Destinations chain. Their new website is http://www.digiplexdest.com/ . There’s an article about it at View link .

Digital conversion completed as of July 2012.

This theatre is now owned by Carmike.

AMC just announced that this theater is closed permanently without notice