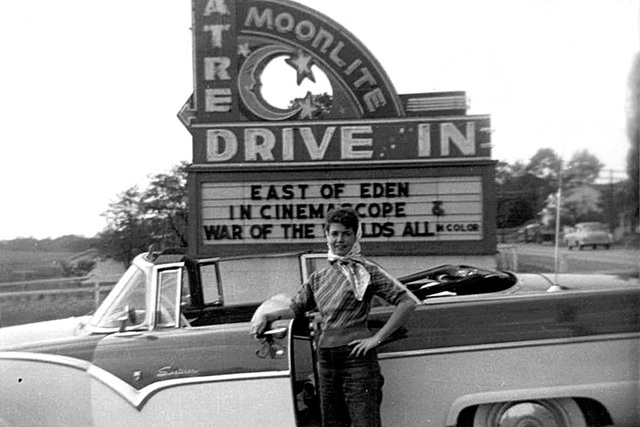 The Moonlite Drive-In opened July 2, 1952 with James Mason & Ava Gardner in “Pandora and the Flying Dutchman”. It has one screen and a capacity for 300 cars and was operated by O.A. Holobough & Louis Hanna of Hanna Theatre Service, Pittsburg. It was still open in 1960.

Address from their website: The Moonlite Drive-In Theatre, 5268 US 322 West, Brookville, PA 15825. The Moonlight has not made the conversion to digitial projection as of yet.

The Moonlite converted to digital projection at the end of the 2015 season.

im Lipuma purchased and reopened the Moonlite in 1996. He eventually converted to digital projection in November 2015.

There’s a great short called The Man Behind the Screen, shot in 2015. It’s all about the Moonlite and Lipuma in particular.

I uploaded clippings from the Brookville Jeffersonian Democrat that show that this Moonlite opened on July 2, 1952, showing Pandora and the Flying Dutchman. More from that newspaper:

In January 1953, the Rose township board of supervisors sued the Moon-Light (sic) over a hastily added tax. J. E. Hollobaugh, described as the drive-in’s owner and operator, had refused to pay. In August 1955, the drive-in won the lawsuit.

In November 1954, “Cinemascope has been displayed successfully at the Moonlite Drive-In”.

In April 1955, strong winds or lightning (?) knocked over the screen for “the second time in less than a month”. The concrete screen supports had just been repaired from the first collapse. “The Moon-Lite (sic) Drive-In will begin showings tomorrow night with a temporary screen, but plans are to erect an entire new structure of three walls to provide additional supports.”

Its first appearance in the Motion Picture Almanacs was 1955 in Brooksville (sic), the Moonlight (sic) had owner or booker as Harner Theatres. In typical MPA fashion, this information stayed the same, uncorrected through at least the 1972 edition.

By the 1976 edition, the town had been fixed as Brookville, but the inaccurate drive-in spelling persisted. In the 1978-84 editions, the owner was listed as R. Neff. The drive-in was gone by the 1986 edition.

ExploreClarion.com wrote that Jim Lipuma “purchased the Moonlite in Brookville after the flood in 1996 and opened it on May 2, 1997.” That flood was on July 19, 1996 when heavy rains caused a Brookville impoundment to give way.

“BROOKVILLE, PA. – The Moonlite Drive-In near here has been sold by Orville Hollobaugh to Richard Neff. Neff operates the Super 220 Drive-In near Altoona and he is widely known in the trade as manager of the Wilson Theatres of Tyrone, Pa.” — Boxoffice, May 2, 1960