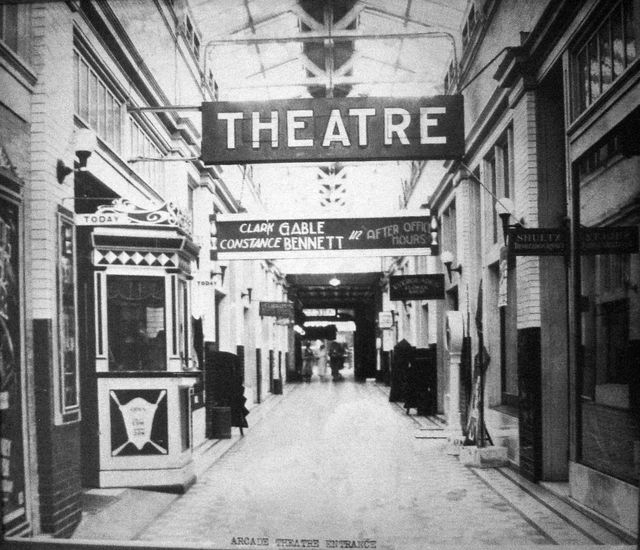 Built in 1915, it served originally as a vaudville house. It was expanded and reopened in February 5, 1917 as a movie theatre. It was rebuilt in 1938 to the plans of architect Roy Benjamin, reopening December 20, 1938.

The Arcade Theatre was eventually converted with a wall dividing the stage to form two screening rooms. By 1989, the theatre had fallen into severe disrepair. In 1991, a benefit starring famed ballet and film star, Mikhail Baryishnikov, raised enough money to completely restore the theatre. It is now host to the Florida Repertory Theatre.

In late 1973 when I moved to Fort Myers (had my first job out of college there) the Arcade was still a first run theatre. I recall seeing some of the disaster movies of the era there…Towering Inferno among them, I believe. I also talked my girlfriend (now my wife) into going to a midnight showing of Night of the Living Dead there. That was an experience! It was a cool old theatre and I’m happy to see that it survives.

Here are my pictures from July 2012. None of the previously posted pictures show the ornate “rear” entrance facing Bay Street. I’ve included a picture of that entrance, which is visible if you click my link.

Started to show movies full-time as of February 5th, 1917. Grand opening ad in the photo section.

Despite numerous Internet sources saying that the Arcade was built in 1908, the name Arcade Theatre does not appear in the Fort Myers News-Press prior to 1915. The only theater names I’ve found in earlier papers are the Court Theatre, which later became the Omar Theatre and then the Ritz Theatre, and was located in the Patio de Leon, and the Grand Theatre, which was at the southwest corner of First and Jackson, and was destroyed by a fire in February, 1915.

According to this 2016 article in the News-Press, the first Arcade Theatre was under construction at the time the Grand burned. It was part of a project that included a number of shops. In late 1916, Harvie Heitman, the owner of the Arcade, rebuilt and expanded the project, including the theater. That was the house that opened in February, 1917.

This article also covers the history of the Arcade, and includes a couple of smallish photos of the theater’s Bay Street entrance, one from the 1920s and one recent.

The Arcade Theatre was rebuilt again in 1938, just about doubling its size, and formally opened on December 20 that year. According to that day’s issue of the News-Press, the plans for the expansion were by architect Roy Benjamin, who was at that time designing all of E. J. Sparks' new and remodeled theaters.