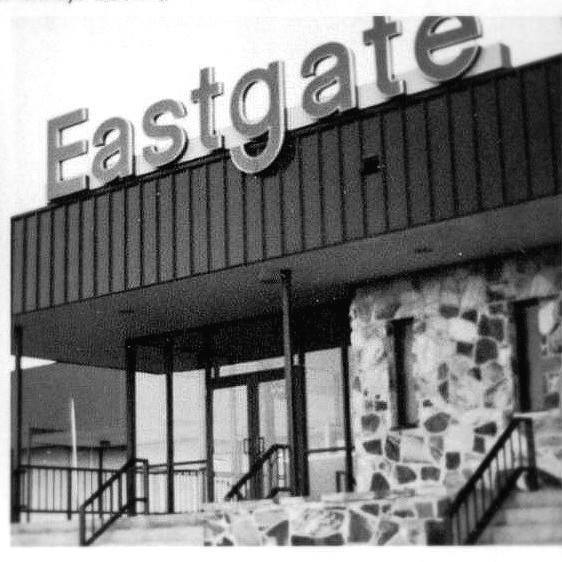 The Movies was located at E. 15th Street on Rangeline Road. Opened as a twin on March 15, 1971. A third screen was opened on June 28, 1974. Originally part of the Hollywood Theatres and later operated by Wallace Theatres. It was one of the first multiplexes and largest for some time, located in Joplin. On December 19, 1981 it was expanded to five screens.

The free standing building was constructed of cinder block and painted a light brown. The main entrance was located in the middle and featured a nice sized lobby but the auditoriums were small and cramped. The Eastgate 5 Theatres closed when the Hollywood Northstar 14 opened. It was demolished in Summer of 2005.

Ever work there Chuck? No. Don’t know who built it originally, but it was operated as a tri-plex by Dickinson Theatres, then remodeled with the addition of 2 screens in 1981 or there abouts. At the time, house #5 was the first Dolby system in Joplin. The Hollywood Theatres/Wallace days came at the very end because of a swap of screens between Dickinson and Hollywood at various towns in Missouri. Only one auditorium was “cramped”, with seat counts of 296,296,300,333 and 212 respectively. It was always larger than the Mall 5. This theatre is currently abandoned, and in poor shape. I’ve recently been inside, through a broken exit door, and found it to have been pretty thoroughly vandalized. It was stripped clean of equipment and seating shortly after closing, so there was not much left to break, except booth glass and water fountains. Kind of sad. In the early 90’s, we would host very large and enthusiastic crowds, and only charged $1.25 to get in.

This originally was a twin call “THE MOVIES” is was one of the franshies type theaters that were built in the late 1960’s. Dickinson bought the theatre when it was experiencing financial trouble and later expanded it. At the time I worked for the Dickinson Circuit they were extremely proud of this theatre and were constationally refering to in in just about every conversation one would have with the home office.

I went by Eastgate just the other day (Thursday, September 15, 2005) and noticed something that I never thought would happen…The Eastgate has been torn down. I was only a kid when I got to go to the theater, but it was my first (and for a time, only) experience at the movies as a youngster. It’s sad to see it go. My older brother was telling me the first movie he remember seeing in that theater was Star Trek: The Motion Picture. I sat in his car looking at the ruin of the building thinking of how it must have been to see that movie on the big screen. (My family are all big Star Trek fans).

I have some pictures of the theater being torn down, if anyone would like to have them, and if so, just drop me an e-mail at

I have many memories of Eastgate 5, but perhaps the most indelible is the memory of its red and gold lobby with elaborately-detailed carpeting. The colors were so impressive to me as a child, as were the red “velvet” ropes and the glassed-in ticket area. It was such an exciting theater experience for a kid. When I was a little older and Mall 5 opened I was so disappointed in its rather plain, grey, spartan lobby! The last movie I saw at Eastgate was in summer of 1999 (Cruel Intentions). I had such great memories of Eastgate 5 that I would drive by occasionally long after it closed. It saddened me to see a decaying possum corpse lying in broken glass by the former concession stand. In that moment, I knew that Eastgate would probably never reopen.

I used to work at Eastgate from 1986 to 1990 as a projectionist and usher. Many good memories and people there. One of the first movies I saw on the big screen was there when I was a kid in the 70’s. We went to go see “Earthquake” in auditorium 3. Wish it was still standing…

I originally saw both The Empire Strikes Back and Return of the Jedi at this theater, among several other great 80s films. Sad to see her go, even if she was just a plain brown box.

The January 15, 1979, issue of Boxoffice said that the Eastgate opened as a twin in 1971, and was acquired by Dickinson Theatres in 1974 when the addition of a third auditorium was underway. The Boxoffice item was about Dickinson’s plans to add two more screens to the complex.

As a triplex the Eastgate had provided 861 seats, and the two additional screens would bring the total capacity to 1,463. The alterations were to be substantial, including the addition of a new lobby, a new front and signage, and redesigning the existing parts of the complex to be wheelchair accessible.

This opened as “The Movies” on March 15th, 1971. Grand opening ad uploaded here.