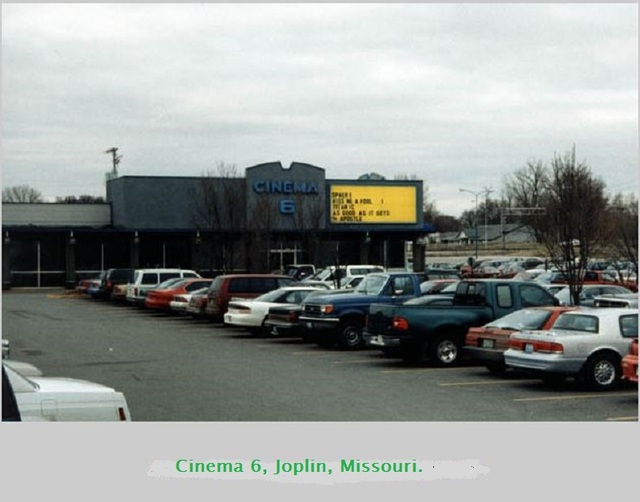 The Joplin 6 was located on E. 7th Street at S. Michigan Avenue. It was opened by Mid America Theatres on June 5, 1987. It became a first run house operated by Hollywood Theaters, then became part of the Wallace Theatre Chain.

The front of the theatre was very impressive when it first opened with the front built out from the theatre building. It has a flat section in the middle with the theatre name in neon and flat attraction panels on each side.

It has a nice lobby but the auditoriums are small and cramped. The theatre was a little run down the last time I was there. When the Hollywood Northstar 14 opened the Joplin 6 was relegated to a sub-run discount policy. It was closed May 8, 2008.

The last few times (2006) I have attended this theater it seemed as if things were getting better. It was cleaner and better-maintained than I had seen it in several years, and the staff seemed much more competent than in recent years as well.

In 2002-2005 there were rumors of rodent infestation and definite signs of decline, such as leaking ceiling tiles and large stains on the carpet. The stains remain. These problems seem mainly resigned to the lobby as the auditoriums seemed to be in decent condition (though somewhat unclean). I find it somewhat sad that this theater has declined so rapidly. A decade ago it was quite a showpiece with its mirrored fountain and immaculate bathrooms (now ridden with grafitti).

Nobody in Joplin seems to know when did this open.

I regret that I have not been able to find any information on the opening of either the AMC Joplin 6 or the Northstar 14 theatres. We have extensive files concerning the historic theatres of Joplin, but none on these more recent theatres. I did some internet research and combed through our newspaper databases as well and again, came up with nothing. I can say anecdotally that Northstar 14 opened for the holiday season in either 1998 or 1999 because I worked there at the time of the opening. I’m fairly certain it was 1999 but I can’t remember if I was 16 or 17, hence the hesitation. I did find a Joplin Globe article from May 2008 discussing the closing of Cinema 6, but could not find information in regards to the opening.

I worked before the opening and for the theaters at those times. Cinema 6 was opened in the spring of 1987 by an outfit out of KC called MidAmerica cinema. They used the old battle star galactica theme as their “now for our feature presentation” music. I started as an usher before the theater opened. We opened with Crocodile Dundee and Star Trek IV, didn’t get decent bookings until summer with Robocop, etc. We were direct competition for bookings with Dickinson Theaters at the time. My manager was Tim Dry and Doug Brown. We wore cheesy red sweater vests then. AMC purchased us in 1988 and we were AMC theaters for about 2 years. After that, the owner of AMC (stanley durwood) had a brother (Richard Durwood) who split off from him and started Crown Cinema Corporation. They ran it until about 1997. Richard did not want his son to take over and sold to the man who owned Hollywood Theaters, a new outfit out of Texas in 1997. I served as a theater manager from about 1990 until I left the theater business in 2000. I worked for a DM named Chuck Dunn. He has worked in cinema for years. Chuck was/is a great man. If that name sounds familiar, that’s because his son is the CEO of Regal, Greg Dunn. When Hollywood bought crown, they also bought all of the dickenson theaters in joplin as well. The eastgage, the northpark twin and the mall 5 were all under hollywood with cinema 6. The plan became open a newer cinemaplex (the northstar 14), make the cinema 6 a dollar house, and close the other theaters. At this time, some of the other managers quit and I was put in charge of overseeing the construction of the 14plex and act as city managers for the other theaters while the transition was occurring. The 14 opened dec of 1998 with Prince of Egypt and ST Insurrection and other films. We had a HUGE opening. Hollywood’s owner spent money too fast on these new 14 plexes and he was bought out and canned by Wallace, who was on his board. Wallace operated the 14 and shut down the cinema 6 after a couple of years. I left shortly after the opening of the 14 and was hired back by Chuck who went to work for Goodrich theaters. Chuck was a man I would follow anywhere, a great soul and like a second father to me. So I went to work for Goodrich theaters in pittsburg for a year, then went to babbages while completing my degree and went into IT. Anyway, I hope this helps fill in some gaps for you guys. Cheers!