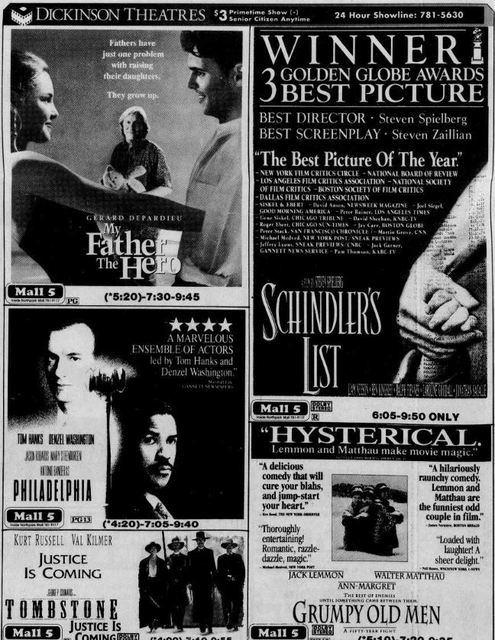 The Mall 5 Cinemas opened December 18, 1986 and was located near the food court in the Northpark Mall.

The theatre had a small lobby and five small auditoriums. It featured first run attractions and was a popular cinema until the Northstar 14 opened. The Mall Cinemas closed December 5, 1999.

Originally, Dickinson wanted to build a 3-plex to supplement the Northpark 1&2 at the other end of the mall. Mall management pressured them to build a 5-plex, and they did. The lobby was never made any larger to accomdate the increased capacity. The houses were small, 4 seating 250, and one smaller house. When opened in 1986, houses 1 and 2 got new Dolby systems. House 3 had to settle for the Dolby setup pulled from the Eastgate 5 up the road (dating to 1981). By the time this theatre closed, the sound system in house 3 was pretty much shot. Houses 4-5 (those the mall insisted be added on) were mono. Booth was incredibly cramped, as were the restrooms. I haven’t been in the mall for awhile, but the auditoriums are completely contained within the structure of the mall, so they’re probably still there.

This theater has recently been destroyed (summer 2006) during an aggressive remodeling of the North Park Mall. What was Mall 5 is now food court space and expanded restrooms.

I was thinking that the former space became Vintage Stock. The one at the Northpark Mall is huge!