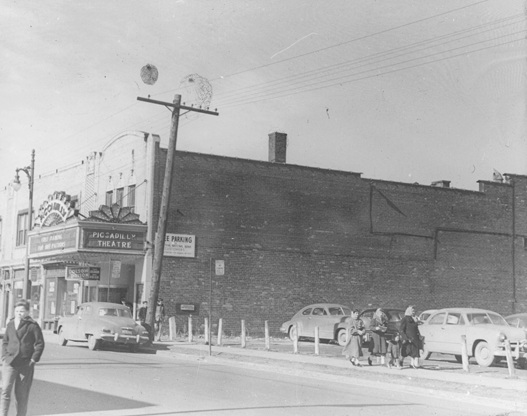 The “Picadilly” movie house the I frequently attended as a child in Detroit during the 1940’s was located on Fenkell Ave. (Five Mile Road), just east of Livernois Ave. and west of Dexter Blvd. In that same stretch was the “Fenkell” movie house. About a mile south, on Livernois near Davison, there was the “Dox”, which was the very last theatre in Detroit to show any film and I think it closed perhaps even in the early 1950’s. The Picadilly and Fenkell were third or fourth run houses, but all of the kids from St. Gregory’s RC parish went there since they were located in the main shopping area for those who lived around there. Grocery stores, barberships and beauty salons, dairy shops, drug stores, delicatessins, etc., all lined both sides of Fenkell from arouind Wildemere to Livernois. My family moved from that neigborhood around 1959.

A picture of the Piccadilly c.1951 can be seeen here.

The Piccadilly Theatre initially closed June 10, 1951 after eight months as an art film concept that failed. But the theater had a last run as the Abbey Playhouse beginning with art and repertory films on November 9, 1954 under Sol Krim’s management (of the Krim Theatre). In February of 1956, the Abbey Playhouse became a short-lived legit, live stage show concept which appears to be the end of the line. Appears to have closed in April of 1956.