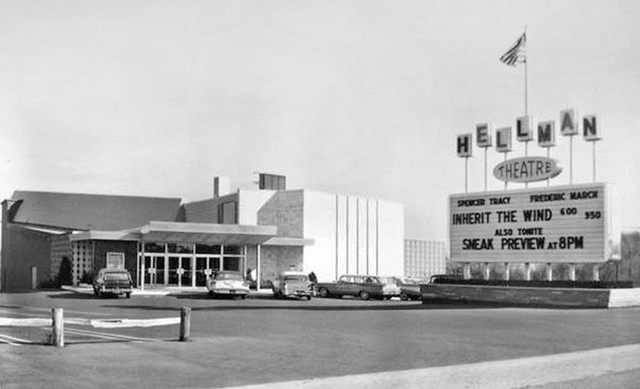 Opened on April 27, 1960 on Washington Avenue, across the street from SUNY Albany. Originally designed with a large, very lavish lobby and lounge, and gold draperies throughout the auditorium. The two center sections had gold seats, while the two aisles flanking the walls had blue seats.

United Artists took over in the 1970’s, and twinned it in the 1980’s. It was the last of the Hellman Theatres in the Albany area to close–around 1989. It sat empty for a few years. A politician used the lobby for his campaign headquarters for a few months. The theatre was eventually demolished.

Hi Ridgewood Ken. Would this have been one of the last 3 strip Cinerama installations? Barely a couple of years prior to the 3 strip system becoming obsolete.

According the the Remembering Cinerama series posted on this site (http://cinematreasures.org/blog/2009/3/27/remembering-cinerama-part-24-albuquerque), Albuquerque was the last three projector installation in 1964.

The earliest reports about the Hellman Theatre indicate that the project was downsized before it was completed. The theater was originally planned with a balcony and was to be equipped with Todd-AO, according to this item from the November 6, 1958, issue of Motion Picture Daily:

“Albany will be one of two cities where Neil Hellman will build suburban theatres next year. Philadelphia is the other.

“He announced here that a 1,200-seat house, equipped with Todd-AO and escalators to the balcony, will be constructed in the spring on a five-acre site adjoining his Thruway Motel and opposite the State Campus. The State of New York has erected several large buildings there, and plans others.

“The location is within the city limits and only 10 minutes from Schenectady, by the State Thruway. Present plans are for the presentation of road show pictures, first-runs and art films. Leon Einhorn, theatre and motel architect, will design the house. Parking facilities will be provided for 500 cars.

“Cost is expected to be around $500,000; the house to be in readiness for operation by Labor Day.

“Hellman will also put up a 1,400-seat suburban theatre on a 6 ½-acre site in Philadelphia, where he now operates the Lincoln and Andalusia drive-ins. Cost of that project is estimated at $750,000. This includes parking for 500 cars.

“Ed Potash, who retired from Universal’s Philadelphia exchange last spring to become Hellman’s general manager, will supervise the two new suburbans.”A later issue of the magazine said that the completion date of the project had been moved up:

“Move Up Date for ‘Suburban’ Theatre

“He said that construction work will begin within three weeks. Originally it was not to start until spring. Hellman stated that the job will be put up for bids in the near future.

“Parking facilities for 500 cars are one of the features. The house, which will also have a stage and dressing rooms, is to seat 1,000 on the main floor, and 200 in the balcony. The latter will be reached by escalators.”As built, the Hellman Theatre had 140 fewer seats than originally announced, the balcony was not built, and Cinerama replaced the planned Todd-AO installation. Apparently it had neither stage nor dressing rooms, eihter. That the house actually opened in April, 1960, rather than July, 1959, and that a second architect (Schenker) was brought on to the project, must have been the result of these changes.

I saw the compilation film by Harold Lloyd, “Harold Lloyd’s World of Comedy,” at this theatre on August 25, 1962.

My recollection of the Hellman was as an employee from 62-63. The roadshow presentation of West Side Story was a highlight of that time. The 50th Anniversary of this film cited on the Cinema Treasures blog states that it ran for 10 weeks… my recollection is 16 weeks since I changed the signs on the Marquee each week. Cinerama in its final reincarnation also was featured at the Hellman who had previously shown the 3 projector Windjammer earlier in the 60s. Hard Tickets and reserved seating… tough nights keeping people in their own seats…… jc

^jkcooney…. Per a (re)check of the Albany area newspapers for the timeframe in question, the Hellman’s roadshow run of “West Side Story” was April 4th – June 12th (1962), which equates to 70 days (or 10 weeks), just as I cited in my 50th anniversary article.

This is a fantastic website. Thanks for having info on this theater. If my memory doesn’t fail me, I believe that in the winter of 1988 the Hellman was playing Moonstruck and Good Morning Vietnam. I was a freshman back then at SUNYA and I went to see both films the same week. Such great memories. 30 years ago this month!

I’ve been burned by Boxoffice moving its archive so many times and having my links go dead that I’m reluctant to do this, but the double page spread about the Hellman Theatre in the magazine’s July 4, 1960 issue has a couple of nice photos I haven’t seen elsewhere, so I’ll take a chance: at Yumpu.com.

I saw 2001 there in 1968. It was the most impressive modern theater. It is a far cry from the cinder block with curtains theaters that are built today.