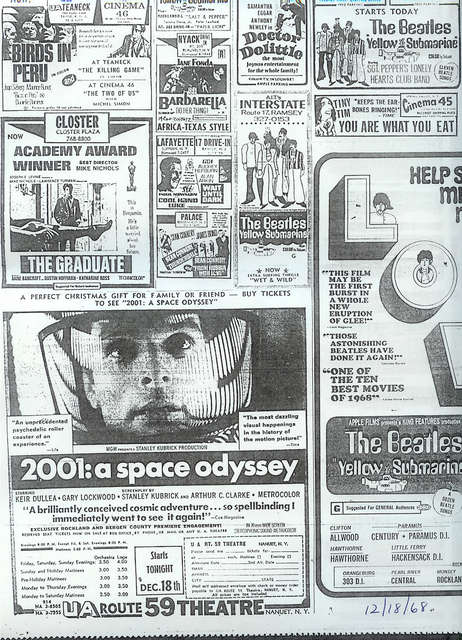 Located in the Thruway Plaza the Skouras Route 59 Theatre was opened on June 29, 1962 with Natalie Wood in “West Side Story”. It had a red tile façade with aluminum 1950’s style lettering on it, very period and probably seen as ugly and outdated when it closed in the mid-1980’s. Beyond the façade, not much is memorable about this site, which became an American General Financial office. It was demolished in December 2021.

As manager of the Route 59 Theatre from 1963 to 1965 I ran reserved seat performances of “Mutiny On The Bounty”,“Lawrence of Arabia” as well as the 3-strip showing of “How the West Was Won in "CINERAMA.” We followed “West” with the original “This Is Cinerama” and “Cinerama Holiday.” In addition to the 3 Cinerama projectors we had to install a 4th projector for the Lowell Thomas “introduction” in the old format to “This Is Cinerama.”

These special Cinerama projectors have a 6 sprocket “pull-down” as opposed to the normal 4 sprocket pull-down.

I enjoyed seeing the newspaper ad for “West” in Bill Huelbig’s comments as well as the interior photos from Kencmcintyre’s comments.

This was a Skouras Theatre at the time later to become UA Theatres.

The CINERAMA neon sign was later taken down off the front of the building and left on the lobby roof. I wonder if it’s still there?

Forgot one thing…the Premier night of “How The West Was Won” was canceled because of the assassination of JFK…Nov. 22, 1963. What a let-down after months of planning.

growing up in pre-multiplex, pre-cable — black & white TV Rockland County, there was no place that compared with the “59 theater”. a beautiful SOA movie house that ran the best films as they they were released (talk about “on demand”). at eight years old I saw “Laurence” in its first run, I still have the color booklet — less the cover. three years later I embarrassed myself with buddies by welling-up during “Zhivago”… too many movies to mention, were burned into my brain at the “59 theater” that probably sharpened my view of life… thanks Ken Lehman

Was the Route 59 ever twinned? (Contradictory info exists in the overview and comments.)

When it was a Cinerama theatre, did it have three projection booths or were all three projectors in one large booth? Also, when Cinerama was removed from the newspaper ads, did they remove the deeply curved screen? Was the curved screen ever removed?

As of last month, the entire building has been demolished, soon to make way for a hotel, I believe.