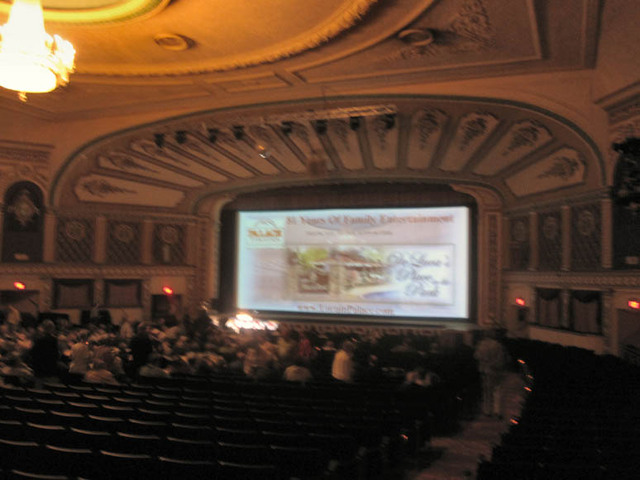 The Palace Theatre was opened on April 19, 1928 with Esther Ralston in “Something Always Happens”. It was equipped with a Wurlitzer theatre organ. By 1941 it was operated by Warner Bros. Circuit Management Corp. It was still open in 1950.

The Palace Theatre is listed on the National Register of Historic Places.

I helped do some of the restoration work on the Palace as a volunteer back in the mid-70s, and I think I can fill in some of the holes in your knowledge.

Downtown Lorain (about 35 mi west of Cleveland) was pretty much trashed by a tornado in 1924. The Palace was built just after that as a full dress silent-movie palace. It still has its original Wurlitzer and was extremely popular well into the 60s. (We moved to Lorain in 1965, and I can remember going to the movies there MANY times and the place was packed.) However, not long after that, a mall was built about fifteen miles away that pretty much gutted downtown, and that took the theaters (Palace, Tivoli, Ohio, and VL Cinema) with it. The Palace was actually the first to go because of its size and the expense of running it.

The place deteriorated pretty quickly – its last owners had done little if any maintenance work to it, and by the time the city bought it in the early 70s, it was almost too far gone to save. However, over the space of about three years (IIRC, it was ready for the Bicentennial in 76)the place was made very presentable. In fact, the first thing they showed there was a Halloween night showing of Lon Chaney’s ‘Phantom Of the Opera’.

Since then, the Palace has been mostly used for stage shows and concerts, with movies only occasionally showing up and then mostly for their historical or classic value. However, to the best of my knowledge, it’s still open and healthy – http://www.lorainpalace.org/theatre.asp

Film Daily Yearbooks, 1941 and 1943 list the seating capacity of the Palace Theatre as 1,800. It was being operated during those years by Warner Bros. Circuit Management Corp.

The Palace was the nicest and largest of the downtown theaters, but was rather run down in the 60’s when I was a kid. I remember it being the RKO-SW Palace back then. It showed primarily Warner Bros., Paramount and United Artists films. Its the only theater to survive.

Great theatre. Any plans to restore the marquee?

In the summer of 1972, I played piano for a musical revue in the Golden Palace at Cedar Point (just down the road). Upon discovering the Palace Lorain still had it’s original WurliTzer, I got permission from the theatre manager to play it. She was delighted and invited our little cast of 6 singers and dancers for a tour. It wasn’t long before we made the short trek and the then tired and dirty Palace Theatre cast it’s spell by inspiring an impromptu performance of “Once Upon A Time They Called It Broadway” on that enormous stage, accompanied by the organ, to that acre of empty seats. The standing ovation of one, lone theatre manager was gratefully appreciated.

And it was magic!

The Palace was a theater I went to oftimes in the 60’s, and into the 70’s, along with the Dreamland, Ohio, and Tivoli…I saw “Yellow Submarine”, “Jason and the Argonauts”, “The Raven”, and many other wonderful movies there.

The Palace has a huge chandelier hanging from the ceiling; I recall sitting under it, ONCE…I couldn’t even enjoy the movie, all I could think about was, “What if that thing falls?” Here it is….

Opened April 19, 1928 with “Something’s Always Bound To Happen”. The Palace had miniature golf on the second floor, later billiards. (Photo added advertising the GOLF) Per the Lorain Historical Society. The Palace front and second floor caught fire in November 1951.