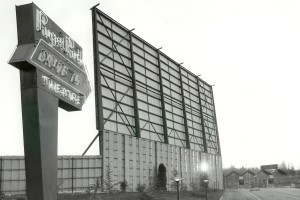 The Puget Park Drive-In was opened on June 15, 1968 with Sandy Dennis in “Up the Down Staircase” & Stephen Boyd in “Fantastic Voyage”. It has a single screen that measures 50 x 100 feet and a capacity for 700 cars. It opened in the Summer from May-September.

Sadly it was closed at the end of the season in September 2009.

I read in the paper that Swedish Medical has fallen on hard times and will have to lay off hundreds, did that expansion even need to be built? The future of America: nothing but Condos, Clinics and pharmacies. The first to house the billions being kept alive forever, and rest to dispense the medical miracles.

@ HogGravynChitlins, the area in question was in dire need of emergency room services closer than the next closest hospitals — a 15-20 minute ride north or south was previously the difference between life or death for many people in emergency situations.

(Swedish isn’t the only hospital with financial troubles; caring for the underinsured and uninsured is breaking the bank for everyone — except insurance and pharmaceutical companies.)

@ Andrea, but did they have to build it there??? The empty lot directly behind the Puget Park, nearly as big wouldn’t have worked??? We can all appreciate that the area needed an emergency room, don’t get me wrong. What we don’t get is why did it have to involve tearing down a bit of history. That was not only the largest outdoor screen in Washington, but the last drive in on I-5, the last operating SRO theatre anywhere. Not to mention all the memories there. It’s sad and it still hurts some of us that it was taken away.

@ R Norenberg, You’re absolutely right, there is plenty of empty commercial land in that part of Snohomish County that could have been just as appropriate for Swedish.

I’m sure SRO got an offer they couldn’t refuse, and perhaps they were looking for a way out of the theater business —– don’t forget that SRO would have had to invest $50K-$100K to switch to digital projectors by the end of 2013.

The other five remaining drive-ins in Washington State are grappling with this issue as I write.

@ Andrea, I know SRO got an offer they couldn’t refuse. I know SRO wanted out for many years, but couldn’t because it was special to John Danz, the company founder. That’s why it lasted so many years more than their other theatres. It’s just that if it hadn’t been suddenly developed it might still be around. I’m sure if it wasn’t Swedish it would have been someone else. Or would it have been… If SRO had sold the property like a normal sale, where people outside the company know it is being sold, who knows what might have happened. Maybe someone else would be running the theatre, maybe not, maybe I’m dreaming. What really gets me going is SRO had said in the years just prior to the closure that the theatre was making more money every year, and doing very well. Also that it was likely to stay around. It’s just sad to some of us, in reality it is SROs fault not Swedishes.

Why was it called Puget Park?

As I got off the freeway off ramp, I immediately recognized where I was despite all the changes, I turned down the road opposite the direction I needed to go, it had been 8 year since I had visited the site. Besides Swedish, there are now condos where the screen once was. I almost kept driving but something compelled me to look around for any signs of the drive in. To my surprise in the back of the Swedish parking lot a small sliver of the ramps and speaker poles are still standing. I snapped a few photos and added them to the gallery.