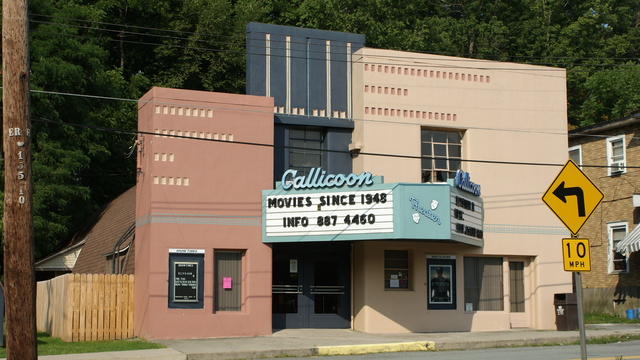 Built as the Harden Theatre by local lumber yard owner Fred Stark in 1948 in a modified Quonset Hut style designed with laminated arched wood beams, the theater originally held 514 seats. Stark built several other theaters in the region, but the only one still in operation is the one in Callicoon, which also had the largest capacity. The Harden Theatre opened on July 8, 1948 with Peggy Cummins in “Green Grass of Wyoming”. It was operated by the Harden Theatres Inc. chain until 1964.

For several years the theatres were rented; then they were sold. Residents and vacationers from the area’s many boarding houses and resorts filled the seats.

By the 1980’s, attendance was declining; the theater was seasonal. In 1986, the theater was purchased by the current owners. Dolby Digital audio and Xenon projection, more comfortable seating and broader concession offerings were introduced. Air conditioning replaced forced air cooling. But the theater’s historic architectural and interior “country” integrity were retained.

The Callicoon Theater is open year-‘round and, in addition to “move-over” films, with the local arts association sponsors a monthly CineArt film series, while maintaining the lowest admission prices in the region.

I saw only one movie in this theatre….while I honestly cannot remember that the movie was, I fell in love with the design and architecture of the inside. It was a beautiful arch, natural wood.

I remember camping on the banks of the delaware river in this town in 1987. I went by this theatre, meant to go in, but never did. If I ever get my camper out and go back up there, I’ll be sure to see it.

Not too many single screen small town theaters left. Go while you can.

I definitely remember this theater. My partner and I had a weekend house in Sullivan County and one of our guilty pleasures was to drive around without a planned destination. We ended up here, meeting the owner and talking about the theater and its history. It’s right on the NY/Pennsylvania border so I guess it’s no surprise about the PA label. I’m glad it’s still around and would love to have a Quonset hut running in San Diego.