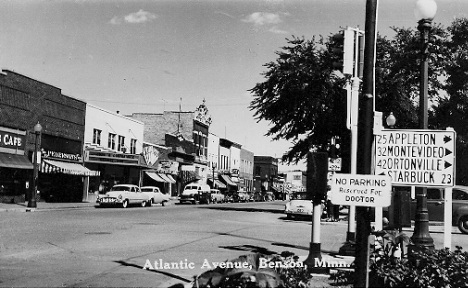 The Theatre opened in 1916 as a silent movie theatre. It was renamed DeMarce Theatre in 1925 when it was taken over by John DeMarce. When sound movies came along the DeMarce Theatre adjusted to the changes.

The theatre has remained in operation continuously with modifications that were necessary over the years.

It now features the latest in sound and projection and shows first run attractions. It is the only operating movie theatre in Swift County.

The Swift County Historical Society shows the DeMarce Theatre as opening in 1916. Since it is their only theatre I presume they would not confuse its opening with another theatre. I will check further into this as I believe the seating of 400 is understated. The Benson Opera House had 400 seats. Perhaps you have the two confused.

I am not trying to be condescending Charles. I am only pointing out incorrect data. Giving an opening date of 1911 when the true date was 1916 is obviously incorrect and misleading to other researchers. Different theatre publications show various seating counts for this theatre ranging from 440 seats to 510 seats. I will concede to your estimate of 400 seats.

IF I have all the correct information? If I were to add all the theatres to this site with the correct data; there would be nothing for you or the other members to do. I prefer to leave the ‘legwork’ so to speak to others. It is a good learning experience for you. I will then make corrections as they are needed.

This photo is supposed to be from 1917, so apparently there were two theaters in Benson at that time. The marquee’s front says Benson Opera House.
http://tinyurl.com/ddjbnv

The caption for the Dreamland says Pacific Avenue, while the DeMarce is on Atlantic Avenue, which might help.

I have to go, so if you want to add the Dreamland please do so.

The DeMarce Theater has a web site.

A vanished web page once provided by the Benson Chamber of Commerce, now found on the Internet Archive’s Wayback machine, says:“

"A motion picture theater opened in Benson in the Aldrich House in 1916. In 1925, John DeMarce purchased the theater. Today, the DeMarce Theater, operated by Larry DeMarce, is the only movie theater in Swift County.”

Apparently the house didn’t become the DeMarce Theatre until 1925, but so far I’ve been unable to discover any earlier name[s] for it.

There is no name given for the theater in this item from the March 10, 1923 issue of Moving Picture World, but if the DeMarce was the only house then operating in Benson it must have been the place:

“One hundred persons rushed from a picture theatre at Benson, Minn., Tuesday night when a fire which started in the operating booth threatened to spread to the auditorium of the theatre. The manager of the theatre was operating the picture machine when the fire started.”