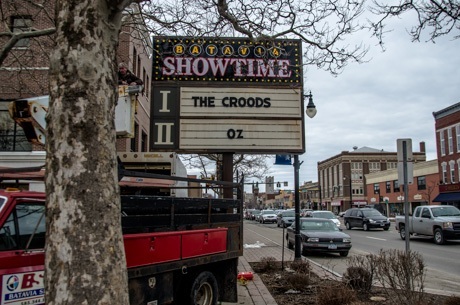 I was just in Batavia over the weekend and there is a former theater on main street besides the ‘mall’ cinemas! A local church may be using it now though.

The former theater on Main St. was once the Mancuso. It was later turned into a twin and now is used as a church

My Mom and her family are from Batavia and the two first run theatres from the classic period were the Dipson and the Mancuso both located on Main Street.brucec

I stopped by for a visit the other day: two decent sized theaters, seats from a General Cinema with the Pepsi logo scrapped off (ie: an AMC era purchase, my guess is the University in Amherst). Non-discript and uncomputerized with a small snack bar and lobby. I hope other folks can offer some insight, the building itself is non-discript with no name, only a marquee with features listed next to roman numerals, the adjacent mall needs to be listed on deadmalls.com – there was nothing short of JC Penny’s, a dance studio, a candy shop and a restaurant inside a perfectly preserved 70’s era mall space.

As I recall from my childhood, there were two movie theaters in Batavia – The Dipson and Mancuso’s (both on Main Street). The Dipson was far superior, with a grand marquee illuminated by bright lights and seemingly emanating the perpetual and irresistible aroma of freshly popped popcorn you could smell from blocks away. At Christmas, Sylvania would hold a special event for the families of its employees at the Dipson, which had a stage and full proscenium with curtain. Cartoons, and usually a Disney film were screened, and then Santa made an appearance on stage and proceeded to give a really nice gift to every child in attendance. This theater maintained and exuded “movie magic” in its design and decoration. It wasn’t quite a movie palace, but it was close. When urban renewal came along, The Dipson was razed to make room for the mall (and we’ve all observed what a success the mall has turned out to be!). Mancuso converted their Main Street facility to two screens, placing the projection booths off-axis to the screens due to limited space, ensuring that all films projected from that point forward would be partially out of focus. Then they opened the mall theaters, and I think converted the Main Street facility back to one screen, running both the mall and Main Street theaters for a while. The original Mancuso Main street theater is the one that’s now used as a church. The mall in Batavia is a monument to the knuckleheads who managed to turn a vibrant, small-city downtown into a ghost town. It’s like the rotting carcass of an architectural dinosaur…and it actually does smell a bit. I’m glad Dipson Theaters are back in Batavia, though.

Dipson is trying to sell the theatre (I’m guessing they’ve made the decision they won’t be the ones to convert it to digital projection) http://thedailynewsonline.com/news/article_229dfbfa-563c-11e2-a485-0019bb2963f4.html

The Batavia Mall in which this theater is located came about as a massive urban renewal project in which a large portion of Main Street was demolished including the Dipson Batavia.

I keep hearing about a theater group in Batavia that applied for funding to restore a theater for their use. Does anyone know what theater it is? Is it listed here on Cinema Treasures?