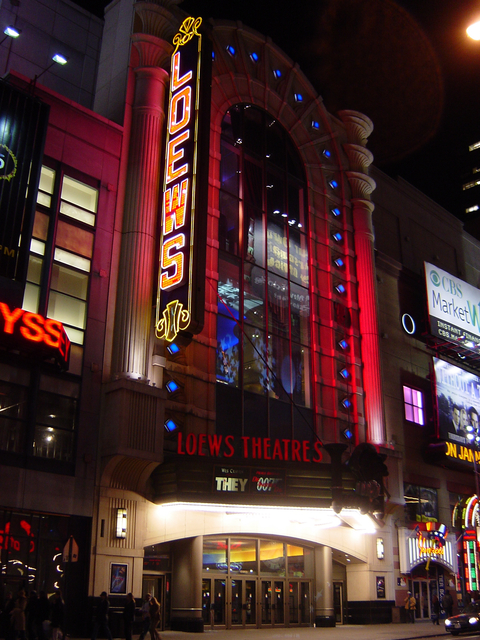 Initially it had little neighborhood competition - the faded Criterion Center seven-screen multiplex at Broadway and 45th; the white elephant Loews State Theatre on the basement floor of the Virgin Megastore, one block north of the Criterion; and the single auditorium Loews Astor Plaza Theatre on 44th Street, west of Broadway - but, by April of 2000, with those aforementioned theatres either closed, facing increasing irrelevancy, or facing attendance drops of several fractions, the Loews 42nd Street E-Walk found itself competing with a even bigger movie (and crowd) magnet across the street: AMC’s first foray into the NYC film marketplace, the Empire 25.

Despite a battle to fill their combined 38 screens with product, both theatres have succeeded in making Times Square arguably the strongest filmgoing destination it’s ever been.

AMC acquired this theatre, along with the rest of the Loews Cineplex chain, in January 2006. As a condition of approving the merger, the state and federal governments required Loews and AMC to sell ten theatres, including this one.

This cinema is still open despite its location being just across from AMC Empire 25. In my opinion, it doesn’t make any sense. I kinda relate this rivalry to Colossus Vaughan vs AMC Interchange 30 or AMC Ontario Mills 30 vs Regal Edwards Ontario Palace 21.

The Regal Theaters are in much better condition than the AMC and better kept. The bathrooms are cleaner as well.

From what I’ve been reading on CT AMC theatres are like the ones of the former UA; not known for good maintenance.

Loews opened this cinema on November 12, 1999, with the following movies: The Bone Collector, Pokémon: The First Movie, Dogma, The Insider, Being John Malkovich and American Beauty.

Renovations begin to update E-Walk appearance to the new, updated Regal design (similar to Essex Crossing and the Union Square update). Work started on the entrance/box-office area first using the space previously used by Starbucks. The original entrance / box-office area closed around second week of December 2021. That space is supposedly going to a new Target coming next door.

Work stopped at top of lower escalators, with more changes to come.

How wonderful to know this space is being re-cycled into more retail space, and no doubt, fast-food outlets. BTW, we also screen movies!!!!

The local Regal here told me that they are removing all box offices in all their theaters and replacing them with Kiosks. That pisses me off because it take away jobs

It looks like the new lobby has an area for a box office, but it’s not in use. There is a series of about eight kiosks in the lobby. People are told to go to concessions upstairs if paying by cash, etc..

Work is due to start soon on the theater upstairs. Rumors of a bar in the area of the old Coca Cola Freestyle to be made.

I was told yesterday that theater 12 will become the new auditorium for 4DX. And theater 2, which currently has 4DX, will become a ScreenX.

I assume that theater 12 will be changed first.

E-Walk is currently under it’s third renovation that Regal has done on this theatre, First time in 2007 after they bought it from Loews Cineplex to rebrand Regal with new seating, #2 was in 2017 was conversion to recliners and 2022 another renovation in addition of Screen X in theatre 2, 4DX moving to Theatre 12 and RPX with Atmos being updated with new seating no recliners according to the manager. They don’t know the grand opening date as of May 13, 2022. I don’t understand why AMC is cheap that the AMC Empire 25 hasn’t received any major renovations.

the current box office is in around one third the space of the original box office, not the former Starbucks space, which is still there and empty. The Regal lettering has been taken off the blade sign that was one of the distinctive features of the exterior, and there’s smaller Regal signage below the blade and above the entrance. And across the street the Empire has some rolls of carpeting in the corridors.