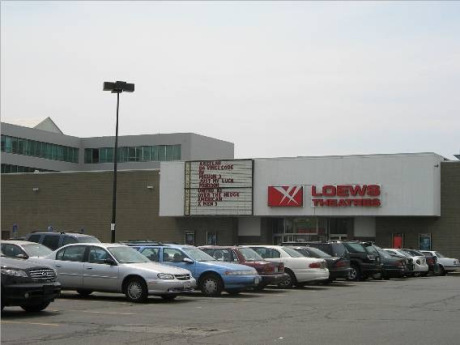 Sack Theatres opened the Assembly Square Cinemas with eight screens on June 12, 1981. According to Alan Friedberg, then president of Sack, it was the first time that so many movie theatres were opened on the same day at a single location in Massachusetts.

The cinemas were next door to, but separate from, the Assembly Square shopping mall, which also opened in 1981. The mall featured Jordan Marsh and K-Mart as its anchor stores, and at the time was considered an inventive recycling of a former Ford Motor Company assembly plant.

The opening of Assembly Square dealt a fatal blow to the nearby Broadway Theatre in Somerville, which closed in the spring of 1982.

On December 9, 1983, Sack added four more screens to Assembly Square. This made it the largest multi-screen complex in New England at the time.

When Macy’s closed the former Jordan Marsh store in 1997, the Assembly Square Mall fell on hard times; soon afterwards, every store except K-Mart had closed. Loews Theatres, which inherited this theatre from Sack in 1988, went bankrupt in 2001.

The Assembly Square Cinemas nevertheless survived long enough to become part of the AMC chain, after AMC took over Loews in January 2006. The cinemas finally closed on the evening of Monday, January 15, 2007 (Martin Luther King, Jr. holiday). The theatre’s landlord has not announced future plans for the property, and it was demolished in August 2014.

Still sitting empty, more than three years after it closed.

And still empty now. I was over there today and it looks the same except the glassed in front was covered in plywood.

I wonder how the roof’s holding up? It was raining hard all day today.

Sack, then USACinemas, then Loews. But the ads just called it ‘Somerville’.

AMC will build a new 12-screen theatre in Assembly Square, according to today’s Boston Globe. Construction will start this year, and it may open by fall 2013.

To my amazement, this is STILL sitting empty more than six years after it closed. I’ve heard of no development plans for this property yet. (It is not owned by Federal Realty, who are doing extensive redevelopment of other Assembly Square property.)

The replacement for this theatre, the new AMC Assembly Row 12, officially opened today in Somerville according to AMC. They are showing movies listed starting today. Considering that they’re about six months from finishing everything over there, i’m surprised it has already opened – they don’t even officially list an address for the theater yet…

Demolition of this theatre finally started this week, over 7 ½ years after it closed. You can see photos of the demolition here: