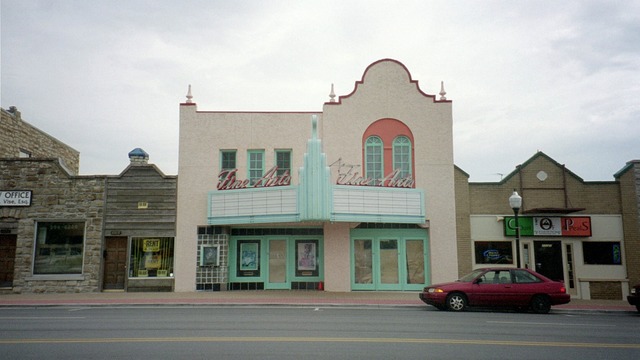 This theater was designed by the Boller Brothers firm of Kansas City and was built by Marion Summerour, third mayor of Shawnee. It opened on Labor Day in 1927 as the Mission Theater with 500 seats.

Around 1942 under Dickinson Theatres, the name was changed to the Aztec Theater. The Aztec Theater operated under this name into the 1970’s, when it was purchased by the Pflumm family and the named was changed to Fine Arts Theater. It was closed for renovations July 20, 1975 with “What’s Up, Doc?”, but never reopened. After closing it was used as bank storage.

In 2020 the Aztec Shawnee Theater reopened as a live entertainment theatre. The theater screened its first movie in 46 years when it screened Bela Lugosi in “Dracula” on October 27, 2021. It was a sold out performance which was repeated on November 10, 2021 and the operators of the theatre now screen regular performances of more classic movies.

According to a March 10, 2005 Kansas City Star article this theatre is scheduled to open in late summer or early fall.

The article’s main subject was two other theatres owned by the fine arts group; Rio (Overland Park, KS) and Granada (Kansas City, KS) which were added to the National Register of Historic Places in February 2005.

Clay- What listing had the Mission or Aztec designed or remodelled by the Bowler Bros ? We would certainly like to verify this as the owner of the theatre.

Looking back I do not see it on a list I have of Boller theatres so I can’t guarantee where the owner of that site got their info. I would love to see this theatre open, it is just blocks from my home.

If the theater was listed on the National Register of Historic Places, a architectural survey was done to verify the architect, engineering firm, and even construction company. If the listing information includes the Bollers as architect of record, then they designed it.

i’m really interested in buying this place and reopening it!… does anybody know the asking price?!

I’m told that this marquee came from the Plaza Theatre in Abilene, KS before it was destroyed. They sure look alike:
View link

My photo from July 2010 of the Fine Arts marquee:
http://agilitynut.com/10/9/finearts2.jpg

The September 4, 2012, edition of the Shawnee Dispatch ran this fairly long article about the delay in getting the Fine Arts Theatre open. There have been conflicts over the city’s building permit requirements, and the owner of the building said that he was ready to abandon the project and sell the building for the $240,000 he had invested in it. I haven’t found anything more recent about the project, so I guess we can assume that it is still stalled.

Closed for good as a movie theater on Sunday, July 20, 1975, with three showings that day of Peter Bogdanovich’s WHAT’S UP, DOC. [Kansas City Star]

The theatre is currently being renovated!

Would love to go inside and look around. Drive by it everyday. When it opens, I would like to be the first to buy a season pass! Thanks for the post “emagnitude”!