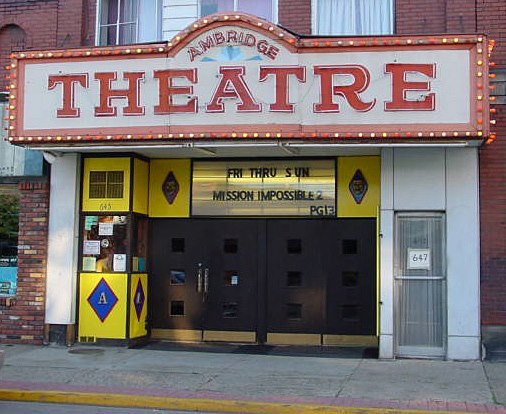 The Ambridge Family Theatre opened in the 1967 as the Warner Theatre, when a former Warner manager built his own theatre in what was originally a sewing machine store after the Warner theatres chain closed its local branch.

Currently the only single screen independent theatre in Beaver County. Owned and operated by the Cockrum family. It was closed August 14, 2014.

The Ambridge seems to have been the name of three distinct theaters in Ambridge, Pa,

A second Ambridge Theatre was on Merchant at Fifth Avenue. After a fire destroyed the theater, an Equibank opened on the site.

Congratulations to the current Ambridge for hanging on proudly in the megaplex era.

I saw ‘The Love Letter’ at this theatre in the summer of ‘99. If I remember correctly, admission was $3.50 and a reg. size popcorn was free during all matinee shows.