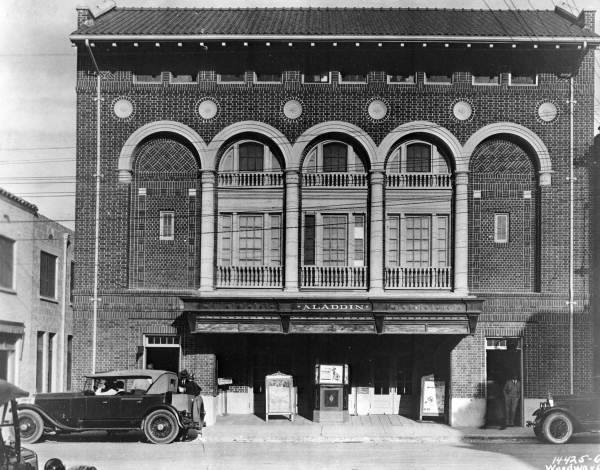 The Aladdin Theatre opened on August 18, 1924 with Rudolph Valentino in “Monsieur Beaucaire”. It was equipped with a Barton 2 manual organ. On December 5, 1936 it was renamed State Theatre and was operated by E.J. Sparks, a subsidiary of Paramount Pictures Inc. By 1953 it was operated by the Talgar Theatre Company chain. It was closed by 1956. On October 29, 1965 it reopened as the Fine Arts Cinema operated by Kent Theatres Inc., which operated into the 1970’s.

The theatre was used as a location when it was named Key West Strand Theatre for the 1993 movie “Matinee” starring John Goodman.

Operated as the State Theatre during the 1940’s by Paramount Pictures Inc through their subsidiary E.J. Sparks.

In 2002, InterAmerica Stage, Inc. was contracted to provide a new stage rigging system, including all required structural additions and reinforcements. TLC engineering was engaged by IAstage to provide the engineering services. A new operating gallery/loading bridge along with grid and head steel additions were required to install a counterweight fly system. IAstage also provided rigging for the FOH lighting trusses. The main drape is very attractive, it looks like a Contour or Austrian curtain but is actually flown in and out as a guillotine. The curtain was designed and manufactured at IAstage’s shop in Sanford.

what an awesome theatre !!!! i was part of the “Village Players” in the late 1970’s/early 1980’s.
we did Jesus Christ Superstar in 1978/79 for 2 years in a row & it was a sell out on all its runs.
that show really got the ball rolling again for the playhouse.
the next thing we did was West Side Story in 1980.
i’d love to share memories with anyone about those shows etc…

An earlier comment said the theater was restored to its original appearance. I was in the theater this past weekend and the only decorative elements in the auditorium are the proscenium and then another arch further into the auditorium on the other side of what might have been organ screens. The rest of the theater was painted a light color and there were no other visible decorations. I would suspect that the original 1924 appearance would have included more decoration. I have not been able to find any pictures of the interior of the auditorium.

According to www.historiccocoavillage.com/history.php?mod=601 during the 60’s this theater was the Fine Arts.

The City of Cocoa sold the theater for $1 to Brevard Community College in 1984 for $1.

Is there any infromation on the organ that might have been in this theater?

1955 photo added as the State Theatre, courtesy of the AmeriCar The Beautiful Facebook page.

Back when the State Theatre was a movie house, there were circuit breakers backstage for an organ. The American Theatre Organ Society may have information on what kind of organ was once located in the theatre.

http://barton.theatreorgans.com/cgi-bin/db2net.exe lists a Robert-Morton 2 manual of unknown size with W. T. Bryan as the location in 1925.