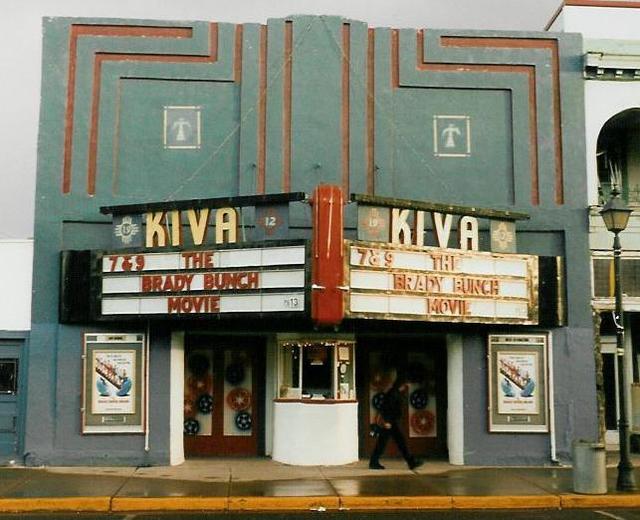 Though it opened in 1912 as the Mutual Theater, the Kiva Theater became the second-oldest movie theater operating in New Mexico, being seven years younger than the Fountain Theater in Mesilla. In 1939 it was remodeled to the plans of its owner Frank Maloof. It was closed in summer of 2013.

Here’s the Kiva in 1995. Comparing the 21st century shots, it’s too bad some of the detail of the marquee and building paint accents have been removed since then.
View link

I can’t find any current movie listings for this theater. I wonder if it’s been closed?

A photograph of a crowd of moviegoers in front of the Kiva Theatre was featured on the cover of the July 27, 1946, issue of Boxoffice Magazine. The Kiva was a Spanish language house at the time.

The Kiva was the subject of a two-page article in the April, 1992, issue of Boxoffice. After having been closed for several years, the house had been bought and refurbished by Malcolm and Amy Neal, who reopened it in March, 1991. The seating capacity has been reduced to 250.

Article in LA Times today regarding filming in Las Vegas has photo of Kiva showing Transformers 2.

A 1995 view of the Kiva – this was linked earlier (message posted 4/25/09), but that shot has been deleted and replaced with this one:
View link

Did this close?, It’s facebook page said that the last movie was in July.

They placed showtimes on google as of this writing.

There is a photo of the auditorium of the Kiva Theatre on this page of the April 29, 1939, issue of Showmen’s Trade Review The caption says that the recent renovation of the house was designed by the Kiva’s owner, Frank Maloff, but I believe the correct spelling of his name was Maloof.

The Kiva awaits a rebirth, as it is obviously shuttered today. New picture in the Photo section.

I watched Iron Man 3 at the Kiva on a busy Saturday evening in early May 2013. From what I heard, the theater closed a few months later.