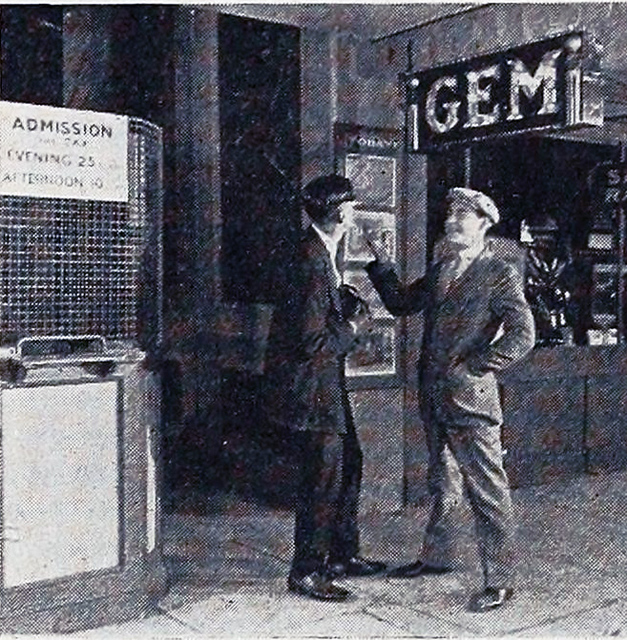 One of many theatres that was once located on South Main Street in downtown Los Angeles. The Gem Theatre was opened prior to 1915. It is listed in the 1926 edition of Film Daily Yearbook with 250 seats, and was probably closed and demolished that year to build the Board of Trade Building.

Were there two Gem’s in Los Angeles? This is from the LA Times:

(March 26, 1930)
…Identified by Shea, according to the detectives, the youths readily confessed and implicated themselves voluntarily in the other robberies. The theater hold-up was that of H.H. Hicks in the Gem Theater at 2488 West Washington Boulevard on the 16th inst….

I thought this might be under Culver City, but I don’t see it on this site.

vokoban: The Gem Theatre at 2488 W. Washington Boulevard is listed here under its later name, the Maynard Theatre. It is in Los Angeles. The former name “Gem” has not yet been added to the listing, which is why the theatre doesn’t come up in a search on former names.

I can’t find any reference to the Gem in the LA Times archives. It must not have been around very long.

The Gem would have been a few doors south of the Republic Theatre,a nd very close to 7th Street. It was probably a very early nickelodeon that was torn down before the Board of Trade Building was built. The northernmost storefront in the B of T had the address 443 S. Main.

The Gem is also listed in these city directories:

Curlett & Beelman’s new Board of Trade Building was featured in a 1926 issue of Architectural Digest, so that must be the year it was built and thus either 1925 or 1926 would be the year the Gem was ground to dust.

Here is a shot of the Gem from the Pneumonic Plague Outbreak of 1924-25 Archives at UC-Berkeley.

The Gem is directly below the Coca-Cola sign in the background. If you zoom in close enough you will see a small sign saying “GEM” with the letter “E” obscured by a utility pole. The word Theatre appears underneath as well.

You have an eagle’s eyes, Pepperama. I would never have spotted that sign. But the photo does confirm that the Gem was on what is now the site of the Board of Trade Building, not the parking lot north of it, and thus that it had to have been demolished by 1926.