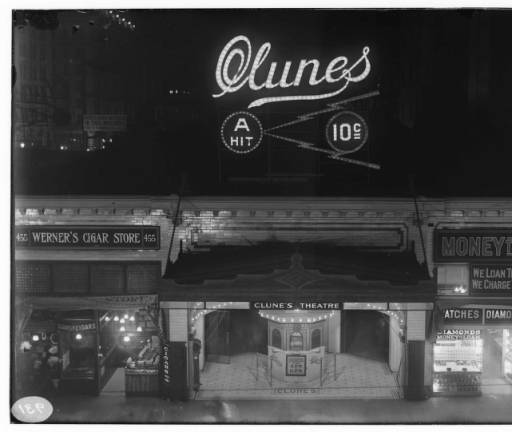 One of the many theatres which lined South Main Street in downtown Los Angeles.

From its name it was most likely operated by and built for William H. ‘Billy’ Clune, who was an early pioneer film producer and exhibitor. Clune’s Broadway Theatre of 1910 (later the now closed Cameo on South Broadway) was also one of his projects.

The Clune’s Theatre possibly dates from around this time but I have no further records of when it closed.

On the site of Clune’s Theatre has now been recently built a low cost residential hotel named the New Senator Hotel.

I believe the map to which you refer also shows a Clune’s building in the 700 block of S. Main (I can’t open my copy of the map because the file is huge and overwhelms my computer’s RAM.) It looks as though there were either two Clune’s Theatres on Main Street, or maybe Billy Clune had his business offices at this address in the 700 block. If both were theatres, then this one was by far the smallest of the two. That building at 5th and Main must have covered at least 15,000 square feet.

There is a short biography of Bill Clune on this page:
http://www.squareone.org/PolarPalace/index.html

A story in the LA Times dated 9/24/13 discusses a fire at Clune’s motion picture theater at Fifth and Main Streets.

The Clune’s Theatre at 5th and Main shows up in the California Index at the L.A. Library website, too. It’s a card referencing a Times ad of May 15, 1909, announcing the opening of the theatre that day.

Well, there’s the history: Clune’s Theatre at Fifth and Main opened in 1909, had a fire in 1913, possibly was closed after that, and the Rosslyn Hotel replaced it by 1917. Short run there.

But this still doesn’t give us more info about the supposed 729 S. Main Street address.

The building lots on the west side of the 700 block of S. Main Street are not very deep. A theatre at 729 S. would have very pretty small unless the building went through to Spring Street. I still think the 729 S. Main location may have been Clune’s offices rather than one of his theatres, but it’s also possible that it was the site of a very early precursor of his bigger theatres, and maybe even of his first nickelodeon.

Also, I’ve found some evidence that the Rosslyn’s 5th and Main building opened in 1915. It was planned as early as 1911, but construction apparently didn’t get underway until early 1914. Clune’s Theatre at 5th and Main had a very short run indeed.

“RA Rowan & Co report the following recent leases through their agency: For the Century Company to the Clune Theater Company was rented the northwest corner of Fifth and Main streets, with a frontage of 70 feet on Main and extending back 150 feet to an alley. The term of the lease is five years and the monthly rental is reported at $1175 which would make the total rent $70,500.”

(The Los Angeles Times, that is.)

The 1909 map has been posted on the LA Times' “Daily Mirror” blog. Here is the Clune’s that was at 5th and Main:
http://tinyurl.com/4ve7jl

A photo of W.H. Clune and a bear: http://digital.boisestate.edu/cdm4/item_viewer.php?CISOROOT=/shipman&CISOPTR=73&CISOBOX=1&REC=1