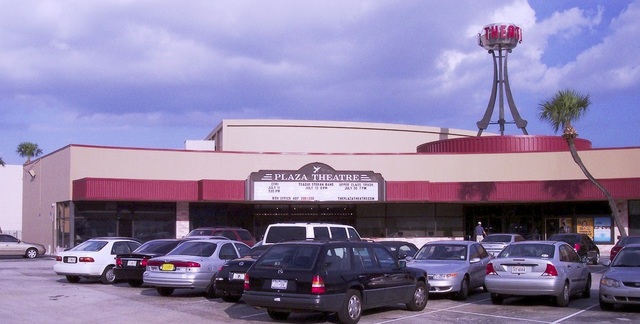 The Clearwater-based Salthouse Group purchased the 39-year-old venue in September 2002 for $1.7 million. Renovations of the 26,509-square-foot facility continued into 2003. The 900-seat theater retains the original “space age” exterior design.

Originally opening November 20, 1963 with John Wayne in “McClintock”, the Plaza Theatre was Orlando’s first two-screened movie theatre. The theatre was later purchased by Cineplex Odeon Corporation in 1985 and declining ticket sales made the theatre a prime location for showing second-run movies. In 1992, it was sold again and became The Dove Family Entertainment Theatre, which performed Christian-themed shows.

In 1996, it underwent major interior renovations to become a performance hall for local shows. The Salthouse Group plans to continue bringing more family-friendly theater to the area such as comedies, concerts and musicals. In early 2017 it was taken over by the Orlando Philharmonic Orchestra.

It was know as the Rocking Chair Theatre. Located behind Colonial Plaza on Bumby, Florida State Theatres opened their premiere attraction on November 23rd 1963, the day after President Kennedy was killed. The picture they opened with was “McLintock”. It had a large auditorium on the right side and a smaller one on the left. The large side had an enormous curved screen. Each of the side walls had a large, rear-illuminated porthole. The smaller side was less ornate with a standard Cinemascope screen. Both sides had a traveling curtain with amber wash lights. The large side ran a grind operation, usually 1:30 to 11:30. The small side ran evening and weekend shows only. Both sides would run the same picture with the same film print! Here’s how it worked: The show times were staggered by one hour. After the projectionist finished running reel one, he would rewind it and walk it 50ft to the other side and hand it to the other projectionist. They did it this way for 11 years until they automated.

I was a relief projectionist from 1974 to 1980. Upstairs they had a nice setup. On the large side, they had Norelco DP70 projectors with Ashcraft Core-Lite lamphouses. The small side had Century’s, Photophone 9030’s and Peerless Magnarc’s. The Norelco’s were the early Todd AO type with the double motor capable of running at 30fps. They had originally been installed in a Miami theatre in 1957 and then reinstalled in the Plaza. I walked in late one night in September 1974 just as John Lovejoy and Art Pope were removing one of the Ashcrafts. Scattered on the floor were the large 70mm magazines. They were in the process of converting over to 60min reels, xenon lamphouses, automation control boxes and sensing tape. Sometime during the night Lovejoy glanced up to me and said, “I’ll tell ya, Rick, this is one cheap damn way to run a motion picture”. In a way he was right. That was the last night of the 20min changeovers. From then on, they ran a different program on each side.

The story of the Plaza isn’t just about the building but the people who operated it. Former managers like Walter Colby and Red Tetter, projectionists like Pope, Lovejoy, Earl Rowland, Phil Sullivan, Gene Ragsdale, Wayne Masters, Dudley Washington and several names I can’t remember anymore. It was a great old movie house and I had good memories there.

“Plaza” (along with “Florida”) appears to be a name Florida State Theatres used in multiple cities, including West Palm Beach. While the WPB Plaza now hosts auto repairs, the current operators of Orlando’s Plaza have a busy and variety-filled music, theater, and comedy schedule.

Made a journey to see singer Neko Case. The Plaza’s layout seems to offer great views from all corners, with the best acoustics these ears have heard in a long time.

Anyone know if the seats are originals (or refurbs of the originals)? They still rock, but the spacing’s a bit cramped. (Yes, people tended to be shorter and especially narrower once upon a time.)

The rocking chair seats are apparently about to be removed and are for sale: http://cinematreasures.org/news/24036_0_1_0_M/

November 20th, 1963 grand opening ad can be found in the photo section and below.

The Plaza Theatre is now owned by the Orlando Philharmonic. It is slowly being rehabbed, but in the meantime, concerts by the orchestra and booked events are being hosted there. Thank you, FloridaBoy54 for your insider information on this theatre.

It is now the Orlando Philharmonic Orchestra. https://orlandophil.org/