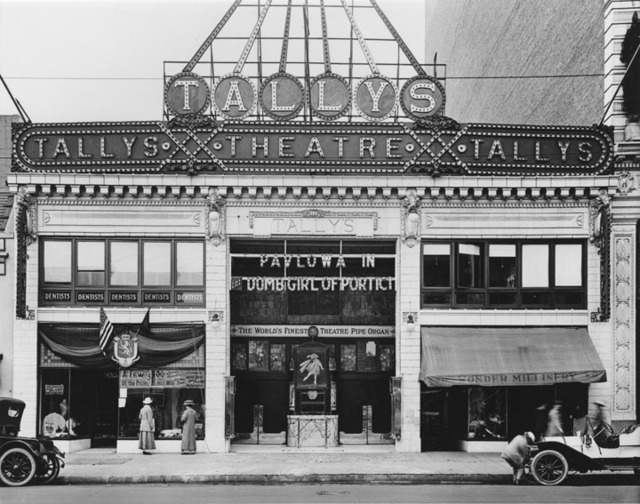 Opened in late-December 1909, it was operated by Thomas L. Tally. It was renamed Kinemacolor Theater on December 4, 1911 but had reverted back to its original name by September 1915. It was demolished in 1929 and an extension to Hamburger’s (later May’s) department store built on the site.

They probably did but in the shots where he’s hanging from the clock it was a set on top of a building next to the Orpheum, I believe. There’s a good documentary about the ‘making of’ Safety Last on this set:

Well worth the money…by the way.

You can also see the Majestic (and, in various shots during the same ascent sequence, the Tower, and the United Artists) in Lloyd’s 1930 talkie ‘Feet First’. You can also see that Tally’s has made way for the Hamburger Dept Store extension.

Also worth watching is the Lloyd short ‘Never Weaken’, which is based around the construction of what would appear to be the State Theatre. You can see the Pantages Hill Street down 7th Street in a couple of exteriors.

Tally’s New Broadway is listed at 264 S. Broadway in this 1908 city directory:
http://tinyurl.com/2bnoph

I’ve read all the comments and disputes about the location of Tally’s Broadway Theatre. Whether it’s relevant or not to the issue, I have 2 Tallygram’s which were the advertisement flyers for the silent movies shown weekly at T.B.T. William Gillette in Sherlock Holmes, June 26, 1916 & Elmo Lincoln in The Romance of Tarzan, April 7, 1919. Both flyer’s (Tallygram’s) have a location of Sunset Boulevard 4501. I hope this is of some help to someone interested.

Correction to the previous post is the address Sunset Broadway 4501. AllenH. Pahrump,NV

Found a great old photo here of it but need to get them to correct the location but can seem to get it done. We’ll know at least:
View link

The January 2, 1910, issue of the Los Angeles Herald said that architects Train & Williams had been engaged to draw the plans for Thomas Tally’s new theater on Broadway adjacent to the Majestic Theatre.