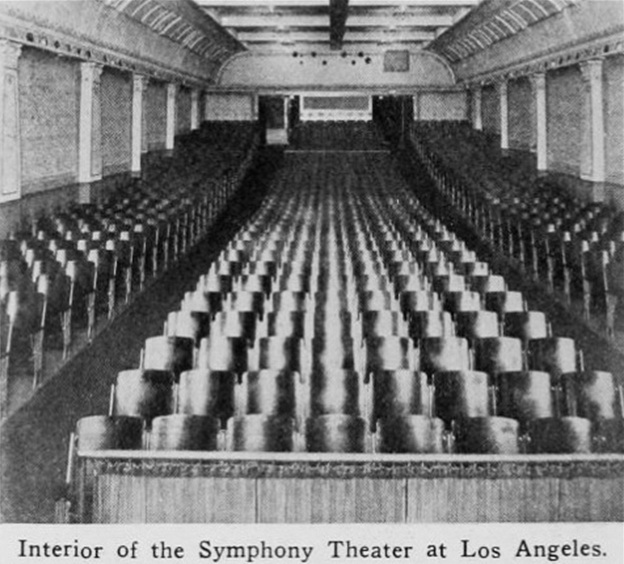 Located directly opposite the Los Angeles Theatre, there is a 1920’s styled building currently on the site.

Previously on this site was the Symphony Theatre, a movie theatre which opened on August 25, 1914 with James O'Neill in “The Lure”. In 1915, it was described as having and attractive front and an elaborate marquee. The Symphony Theatre was operated by Mr & Mrs C.H. Dubois. It was demolished in 1923.

Here are some things about a major remodel at this theater:

(Jan. 9, 1921)
In order to enhance the presentation of pictures the Symphony Theater has been entirely redecorated. The new color scheme is a skillfull blending of old rose, ivory, dull blue and henna, with old rose dominating. No trace remains of the original color scheme. On the stage a rich old-rose velvet curtain has replaced the blue one, and to serve as a shield to the screen when it is not being used, a gold curtain has been installed. The entire wiring system of the Symphony has been changed and electrical engineers have designed more elaborate effects. The ladies lounge has been redecorated in pink tapestry, old rose rugs, and entirely new furnishings. The orchestra pit has been enlarged to allow the addition of more musicians, and the orchestra has been greatly improved.

(Feb. 13, 1921)
Final arrangements have been consummated between Dr. Breckwedel, managing director of the Symphony Theater, and Thomas H. Ince, president of the Associated Producers, Inc., giving the local film impresario exclusive first-run privelage in Los Angeles on all photoplays produced and distributed by the group of directors, including Mr. Ince, J. Parker Read, Jr., Mack Sennett, Maurice Tourneur, C. Gardner Sullivan, Allen Dwan, George Loane Tucker and Marshall Nellan. The Symphony Theater is undergoing a complete physical change. On completion of the remodeling this photoplay house will be essentially attractive. It will be known as the New Symphony Theater. A Hope-Jones organ is being installed and the orchestra is to be enlarged. The decorations are in the hands of a famous Boston interior decorator, who is personally responsible for hundreds of America’s most beautiful picture theaters.

(Feb. 20, 1921)
On Tuesday the New Symphony Theater, completely remodeled, will be open to the public for the first showing of the Thomas H. Ince film spectacle, “Lying Lips.” On account of the many changes made in the appearance of the theater and the many improvements, it was decided to close the theater for Sunday and Monday to allow ample time for rehearsals to insure the proper presentation of the film.

This, I think, is the beginning of the end and the end of this theater. I wish there was a photo of the interior at least.

(Apr. 10, 1923)
A partial interest in the property at 612-616 South Broadway, adjoining the Story Building on the south, has been sold by the Columbia Investment Company to the Warehouse Realty Company for $11,500 a front foot. The property has a frontage of approximately sixty-two feet on Broadway, and extends through to an alley for a depth of 160 feet. Present improvements consist of a two-story and basement building, the ground floor of which is occupied by the Walkover Boot Shop, and by the Symphony Theater. The deal involved the sale of a large portion of the stock in the Columbia Investment Company to the Warehouse Realty Company, which, through this transfer, becomes the virtual owner of the property. Confirmation of the purchase of additional stock or plans for the improvement of the property, could not be obtained from officials of the Warehouse Realty Company last night.

(Oct. 21, 1923)
WE MUST MOVE!
BUILDING COMING DOWN
SALE NOW ON WATCHES, DIAMONDS AND JEWELRY AT COST AND LESS
Humphrreys Jewelry Co.
616 South Broadway
Next Door to the Symphony Theater

I don’t know what happened exactly to this theater, but by 1942 there are many ads for Desmond’s at 616 South Broadway. Nothing shows up at 614 South Broadway after the mid-20’s. Maybe I’ll try to find some photos of the Story Building and there might be a surprise.

Here’s the solution. This building was torn down in 1923, and Desmond’s Department Store was built on the spot. Opened as Desmond’s for several decades, probably never had a theater in it.

A Harold Lloyd film was breaking attendance records at the Symphony in June 1922, according to the LA Times. It looks like the theater was torn down a year later, per Scott. There aren’t any more ads for the Symphony in the Times after 1923. Status should be closed/demolished.

I think we’ve established that the Symphony building was replaced by Desmond’s in the early twenties. Subsequently the building that is at that address now is not connected with the original theater.

Here is a November 1917 ad from the LA Times:
http://tinyurl.com/2lsgpd

The Dorothy Peyton Gray Transportation Library and Archive provides this postcard view of Broadway south of 6th Street before Desmond’s was built. The Symphony Theatre occupied the white building with the arched entrance, adjacent to the much taller Story Building on the corner. The copyright date on the postcard is 1916, two years after the Symphony opened. The theater has no marquee in this view, but there’s a big rooftop sign.

The view includes the Palace, then still the Orpheum, a few doors down Broadway. for some reason, the postcard’s colorist chose to make much of the facade of the Orpheum a reddish brown, as though it was faced with brick instead of the bright terra cotta it actually sported.

Here is a link to a night time photo showing the huge electrical sign above the theater. 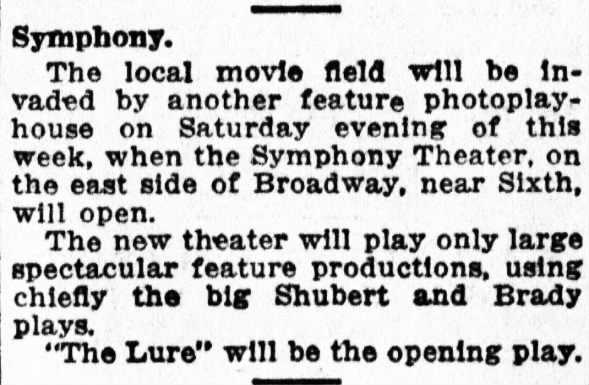