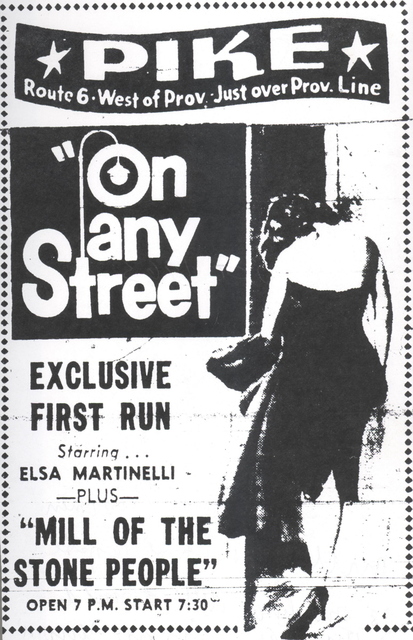 It was located about two miles out from the Providence-Johnston city line on Hartford Avenue (Route 6), just beyond Johnston Memorial Park. Auto dealerships occupy the land formerly used by the drive-in.

In May of 1968 the Pike was showing the immortal Mondo Freudo & The Festival Girls.

In 1963 you could see this double bill of dubbed Italian films, both actually considered very good. They were: On Any Street / La notte brava, Mauro Bolognini, from material by Pier Paolo Pasolini & Mill of the Stone People / Mill of the Stone Women / Il mulino delle donne di pietra, Giorgio Ferroni, 1960. Sexy Elsa Martinelli was a considerable draw at the time.

“PROVIDENCE – George Card, long identified with the amusement park business, has been named manager of the new Pike Drive-In located on the Hartford Pike at Johnston, three miles west of this city. Operated by Albert M. Schuman and Louis D. Rogow of Hartford, the new drive-in is on the site formerly occupied by the old Hiway Auto Theatre.

“Very little remains of the old open-airer. Schuman and Rogow practically revamped the place from top to bottom. A new screen has been erected and Century projectors were installed by the Massachusetts Theatre Equipment Co. of Boston, along with in-car speakers.

“Parking facilities for close to 600 cars will be increased as soon as all remodeling and building is completed. As patrons drive in under a new overhead sign, which cost approximately $3,000, they are greeted by side walls beautifully decorated with scenic paintings. The surrounding grounds have been newly landscaped. Among other innovations is a cafeteria-style snack bar.

“The theatre has already been opend to the public, but workmen and painters are continuing the improvement program.”

As the HiWay Open Air Theatre, the place had lasted only three months in 1949 after being opened by Anthony Petrucci. The theatre was then sold and would become the Pike Drive-In, as described in my previous entry, after some modifications and revamping.

drivein.com states this drive in was closed in 1968.The land transaction may have occured then.but the last movie was closer to 1970.I recall going to my brothers johnston high school graduation in june of 1969.afterwards he and his friends went to howard johnsons to eat (now a cvs drugstore at the intersection of hartford and atwood.then to the pike.he also recalls it being open the following year before closing along with the rt 44 in smithfield a mile or two away.

Mr. DeLuca < do you know of any photos of this drive-in.

I am from Killingly st and I remember going to this theater, I had remembered some kind of a train ride there as well.

No,unfortunately I don’t know of any.

I also remembered going to a small amusement park on rt 6 near an apple orchard , it had a river boat ride and go carts , I think it was near what is now sunset orchards. Gerald , If you go to Drive-ins.com you will see some of my posts (seekonk Dreive-in) and I am also on Crescent Park website as well. I also made some contributions to the Rocky Point film (you must be this tall) Do you remember one of our local Drive-ins that had a mini train ride around the outer parimiter ?

David, it was the Pike that had the train, it ran around the bottom of the screen, Earl Clancy managed that place before he went to the Shipyard, he mentioned it had the train years ago, the pike’s final season was 1969, in the summer of 1970 a few of us from the shipyard had to dismantle it and remove all the sound and projection equipment, we moved the equipment to both the Shipyard and the seekonk where it was stored.I believe the reason for the closing of both the rt44 and the pike was due to a new freeway being built, hope this helps, Ken- Arizona