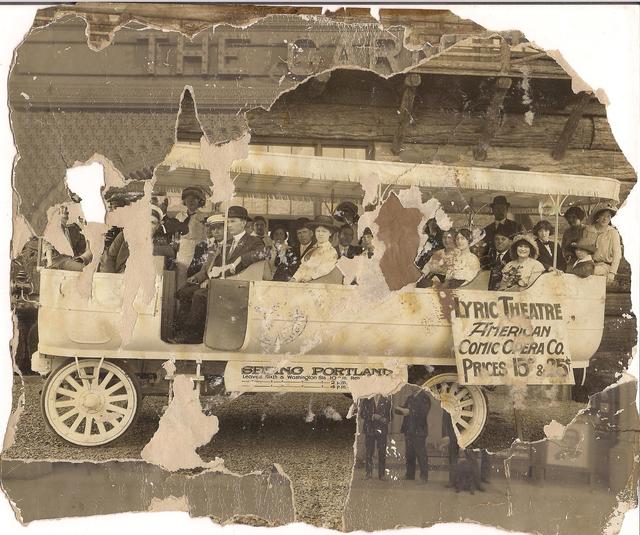 This Broadway Theatre stood on the west corner of the 600 block of South Broadway. The current building on the site is in an Art Deco style and houses the Broadway Jewelry Mart.

There is no record of this theatre operating after 1941 in Film Daily Yearbooks. I presume it closed maybe sometime in the 1930’s when the current building appears to have been built?

The address 601 S. Broadway and details come from the Los Angeles Conservancy Theatres Database. I have to agree from the evidence gathering here that it is looking less likely that a theatre ever existed in this building. However we will have to wait and see what further evidence turns up.

Regarding the Tally’s New Broadway Theatre in the 500 block of S. Broadway, could the Garnett Theatre (former Tally’s) be the one? Listed on Cinema Treasures under Garnett it was located at 554 S. Broadway.

Having seen the 1929 picture of the Arcade Building, I’m sure that Tally’s New Broadway is the Garnett. The lot between the Arcade Building and Silverwood’s store on the corner of 6th Street looks to be about the right size for this theatre.

I’ve never seen the Conservancy’s theatres database, but I’m sure they have had access to a lot of information about the city’s buildings. One reason I can think of for an error is that often, permits were issued for planned buildings and then those plans were never carried out, but the records remain in the city’s files, with no indication that the building wasn’t built. It’s possible that a theatre was planned for this site, but not built, and the Conservancy’s researchers didn’t follow through to find the age of the building which now stands on this site.

Here is a January 2007 photo of the current business:
http://tinyurl.com/vcxpg

The changes announced by W.H. Clune for advancing his popular Broadway theater still further, are now taking place. In the future this splendid theater will give big feature film dramas with much of local interest interspersed. Yesterday, however, the ever popular “Adventures of Kathlyn” entertained capacity crowds the entire day.

A.F. Rosenhelm, architect of Clune’s new Broadway Theater, has awarded the general contract for the construction of that structure to John F. Jacobs & Son.

ken mc: The articles you quote must refer to the Clune’s Broadway Theatre which later became the Cameo Theatre. Despite what the L.A. Conservancy’s database says, I don’t think there was ever a theatre on this site at 601 S. Broadway, unless it was a storefront nickelodeon.

If I come across anything definitive on the 601 address, I will let you know. I may have access to the LAT archives soon, as opposed to just the free stuff.

I know this article just says “A Broadway theater”, but the guy’s name was just too funny to keep to myself. Maybe he gave a fake name to the police? From the LA Times, 12/23/21:

Asserted failure of C. Sharp Minor, an organist, to appear in court after being accused of driving forty three miles an hour on Lankershim Boulevard, resulted in his arrest yesterday. He was taken at a Broadway theater, where he was playing.

In regard to ken mc’s comment directly above, I believe I’ve seen, in a photo in the L.A. library collection, a rooftop sign for the Broadway Theatre in the 500 block. The photo is a view south on Broadway from north of 5th Street, and the sign is barely visible. You can make out the word “Theatre” but not the theatre’s name. I’ve searched the collection again, but that particular photo hasn’t come up. I’ll keep trying.