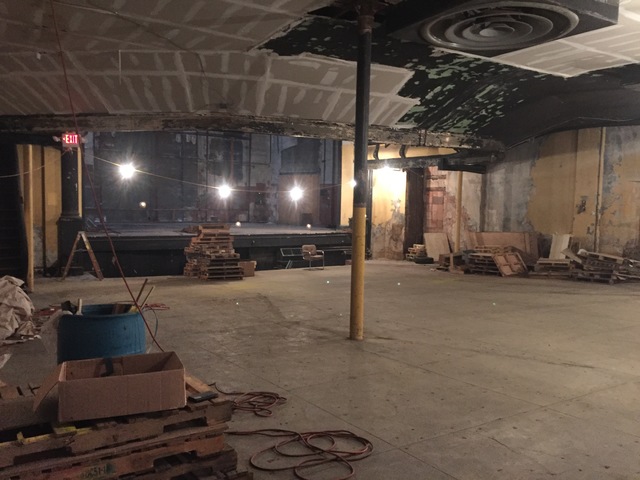 This is my first visit to Asbury since I posted in early October that the theater had been sold to Sackman and that a restoration was planned. Mattison is one block off of the main drag of Cookman and is much quieter but a restored theater will help change that. The Office building which envelopes the theater is fairly large and handsome. However, the first thing to go should be the storefront mosque and the adjacent Bail Bonds office. This is not the image you want to represent. The Marque, which was removed in the 80’s, should be restored to define the entrance of this theater. Peering through the “lobby” entrance it appears that some work has started, but the lobby appears to be very disappointing. It is really small and doesn’t appear to have ANY character at all. There is a small staircase off that lobby that I assume would go up to the balcony. The new owners say that they expect to have a 1,000 seat theater but the capacity at the time of closing was in the 800’s. A prior plan to renovate envisioned a comfortable theater of 600. No offense, but New Jersey is not one of the slim states and larger seats will be required. I also have to assume that nothing is left of the original ornamentation as none ever been referenced in any article that I’ve seen so the “state of the art” performing arts space will likely just be a “modern” space with little reference to the past.

I found a photo in the book Asbury Park’s Glory Days that shows that the Savoy did not ever have a marquee but it DID have a tall blade over the entrance that spelled out Savoy. At a minimum, a marquee or a blade needs to be installed to give this theater, which is otherwise hidden from the street, some presence.

Ran into the owner today. He said its ‘sold’ and there are no seats, but said the stage was there tho. I could see into the lobby, or what was left of it and it looks like theyre doing work in there.

No one mentioned the 1965-66 winter stock co. that operated it as the Asbury Playhouse. I performed my first role as an actor on that stage as Rumpelstiltskin. And the rest is history. (lol). Actually, I am a SAG actor now. Who knew?

I was an actor/apprentice in the 1965-66 Asbury Playhouse at the Savoy Theater. I played Marvin in Enter Laughing, Bollinger in Inherit the Wind, a Shark in West Side Story, chorus in Brigadoon. I’d be interested in any production photos that might exist. Contact me at .

December 25th, 1970 grand opening ad as adult cinema in the photo section. It was an Art Theatre Guild theatre.

Here’s an article from today’s Asbury Park Press talking about the renovation of the Savoy, which is currently under way. It includes a short video of the interior.

There is also a 22 photo collection titled “The lost theatres of Asbury Park”, which is also the title of a seperate article in today’s Press. There’s a link to that on the article page, or you can just click here. Always nice to see an old theatre come back to life! ;–) .

So glad this theater is finally being renovated and not torn down. I’m still looking for any production photos from 1965-66 winter season of Asbury Playhouse at the Savoy Theater. I was a young actor, just starting out in the business. Now semiretired.