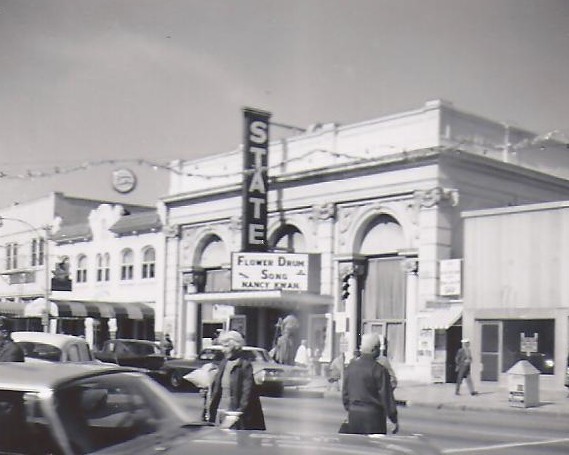 The State Theatre opened May 1, 1950 in a conversion of a building originally built in 1924 as a bank. It closed in 1982. The theatre mostly hosts live concerts but has recently hosted the Renegade Films' Saints and Sinners Film Festival.

RockSalt: I knew your Father or Grand Father who was a collector of German Luger Pistols. We both were members of the “Tampa Bay Gun Collectors” club. He had a office at the “Center Theater” which was the former “Roxy Theater”.

An additional comment regarding the PLAZA TWIN THEATRES … The last 70mm print ran at the theatre was BRAINSTORM with Christopher Walken. Of course, I was there in the projection booth.

I checked out the Plaza booth under Cecil Fernandez, but I never got to work there.

Cecil sent me to the State and Cameo, but they both closed before I got to work there. Chuck Horton was at the Cameo and John was at the State.

This opened on May 1st, 1950. Grand opening ad in photo section.

Currently this is a music venue. They pulled the main floor seats. ISD has reduced the capacity due to life safety issues; owners fighting for the extra capacity.

Please note that I don’t know the details of capacity restriction and understand from the media that ISD has increased capacity somewhat, so the owners are making progress. The city needs more theaters so I hope it will return and I’d love to help the owners bring it back for mixed program events and films.

A document listing historic buildings in St, Petersburg says that the 1924 bank building which was converted into the State Theatre in 1950 was designed by Atlanta architect Neel Reid.

Reid’s fine Beaux Arts facade is still intact, but judging from the two interior shots in this web gallery the original interior is gone. It looks like much of Archie Parish’s streamlined 1950 remodeling probably remains.

Sold and to be restored.