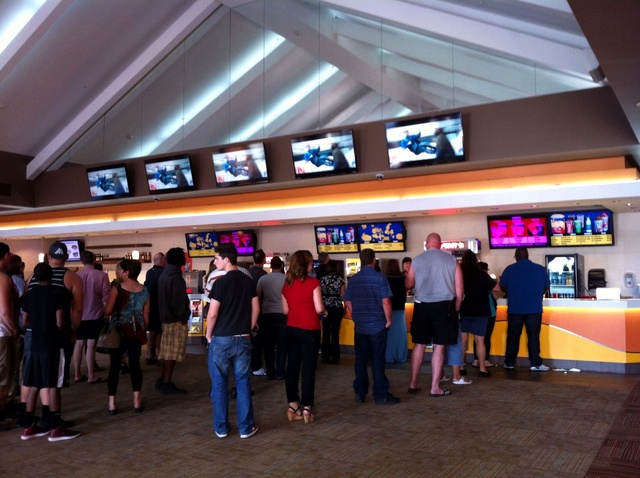 After a refurbishment, it was re-opened by Galaxy Theatres on March 8, 2013 as Green Valley Luxury +.

The Green Valley is CLOSED for ever.

Movie theater closes
Regal Entertainment Group closed its UA Green Valley 8 movie theater on Sunset Road near Green Valley Parkway in Henderson on Sunday. Regal continues to operate eight theaters in the Las Vegas Valley and has plans for a ninth theater at Interstate 215 and Charleston Boulevard, to open in conjunction with Red Rock casino.

The UA Green Valley 8 theater was identified as an underperforming location, said Dick Westerling, senior vice president of marketing for Regal Entertainment, based in Knoxville, Tenn. Employees were offered jobs at other Las Vegas locations, he said.

John Kilduff, president of American Nevada Company, the company that owns Green Valley Town Center, said a new theater will not be put in its place. He said the company is working on rejuvenating the retail center and a theater does not work into those plans.

American Nevada is owned by the Greenspun family, publishers of the Las Vegas Sun

I didn’t see the former theater when I was in Henderson yesterday. I was right at Sunset and Green Valley Parkway too. Perhaps this has been remodeled into something else.

its still there its in the parking lot with olive garden…..its stupid they wont put another theatre in its place… i use to work as a manager of a movie theatre for a few years and the down side of the green valley theatre was………….it was a regal group theatre and we all know that regal offers a terrible movie going night….i would love to reopen the green valley 8 with the company that i worked for it will make that area much better to everyone that lives there….down side to vegas is we all have to walk into a casino just to watch a movie at the theatre….so that would be a major change for the area

Would anyone know as to where one would go to see about leasing or purchasing the theater?

Galaxy Theatres is going to open an eight-plex at this location in October, 2012; this article is not exactly clear if the new operation is a retrofit of this theater or a new build.

It is a major retrofit; here is an article about the makeover’s progress. Galaxy may open the renovated theater in March, 2013.

Galaxy Theatres re-opened the Green Valley on Friday, March 8th, 2013. This is the first theater in the Galaxy chain to be branded as their “Luxury +” line, a change Galaxy hopes to make to their Cannery location in North Las Vegas by the end of the year.

All of the auditoriums were remodeled to take advantage of stadium seating, but with an extra twist. Every seat in the theater is that of a leather reclining seat. Due to this change, the auditoriums now can only hold anywhere from 60 to 150 seats. Not only are all of the seats comfortable, but they’re all reserved. You pick which seats you want either online or at the box office.

In addition to the remodeling, all of the auditoriums now have new “floor-to-ceiling” screens installed as well as Christie digital projectors and Dolby Digital 7.1 surround sound. Galaxy hopes to install a 4K digital projector in one of the theaters before the summer movie season begins.

Besides the seating, the item that got the most attention from the news is that this is the first theater in town to have beer and wine service during all hours of operation, unlike Town Square’s brief foray earlier last year.

I’ve been to this theater twice since the re-opening and this is probably now one of the best theaters in Vegas. The projection isn’t as great as some of the 4K Barco or Sony projectors Brenden, Century, and Regal use around town, but Galaxy nailed the “luxury” part down.

This was opened by United Artists on May 19th, 1995. Grand opening ad posted.