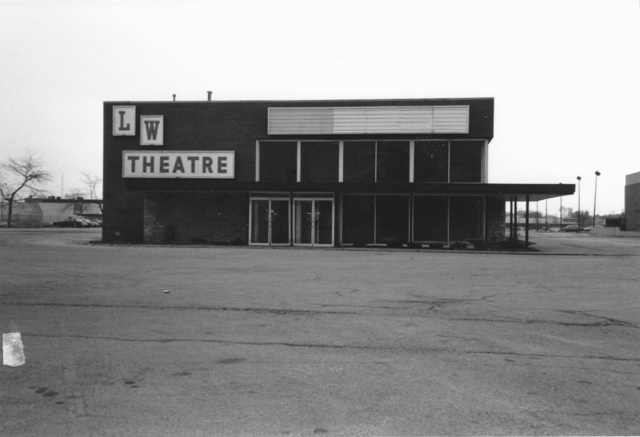 The Lawrencewood Theatre was located at the Lawrencewood Shopping Center at Oakton Street and Waukegan Road. The theatre was opened in June 10, 1966 with Debbie Reynolds in “The Singing Nun” & Roau in “Tiko and the Shark”. It was operated by the Kohlberg Theatres chain. The architect was Patrick Perretti.

It was closed for a while, then reopened in June 1984 by M & R Amusements as the Niles Square Cinema with “Star Trek III - The Search for Spock”. The cinema operated at least into the 1980’s. The shopping center and theatre were later razed and replaced in the mid-1990’s by “big box” retail stores and the new Niles Civic Center.

The Lawrencewood Theaters were owned and run by my family a.k.a. Kohlberg Theaters. We also owned and ran The Morton Grove Theater. I managed it for many years and we ran mostly family films. We had a very strong “Disney” following.

It was great as Kohlberg Theaters but that was when Goldbatt’s was the anchor and S&H green stamps was a big draw there. Cineplex, Loews, and the like did the buy all then go bankrupt plan on the industry then run away with your pockets full of money. Chicago lost…

I remember my parents dropping us off at the Lawrencewood theater to see some of the worst kiddie matinees on weekends in the late 1970s. This was rock bottom schlock too—not the movies that were playing the other normal theatres in town. These were the K Gordon Murray movies you now see for sale in the Something Weird Video catalog. Anyone else remember these movies or titles?

Yes, we played those cheapie Kiddie shows for the Kids on Summer break,Daycare,Kids in the neighorhood,summer camps.Film rental went with cheap kid shows.Did get on Charlton Heston’s “PLANET OF THE APES”.What bunch of upset parents. We also played one of the first music clips from a late show,“WE’RE AN AMERICAN BAND” by Grand Funk.It was always adventure with me at Regency Mall I,II,and III and National Hills theatre.I think the Daycare folks liked it!

I don’t remember any of the titles (and nor had I ever heard of K. Gordon Murray until now) but here’s what the Internet Movie Database www.imdb.com has to say about him:

“Towards the end of his life Murray got in tax trouble with the Internal Revenue Service, which seized all his films and took them out of circulation. Before the case could come to a conclusion, Murray died of a heart attack.

He is buried in Ottawa, Illinois."

So because of that litigation is probably why no one has seen his movies in recent years.

Here is a list of his films. http://www.imdb.com/name/nm0615096/ If you click on a few of them, you’ll notice they’re shown as “lost”. He did other shlock too, including one with Mickey Rooney called “Thunder Country”.

I went to the Lawrencewood when it opened..Soon after they twined the Portage Theater in Chicago..M&R were on a buying spree. Must have been a diaster for those theaters didn’t last long.