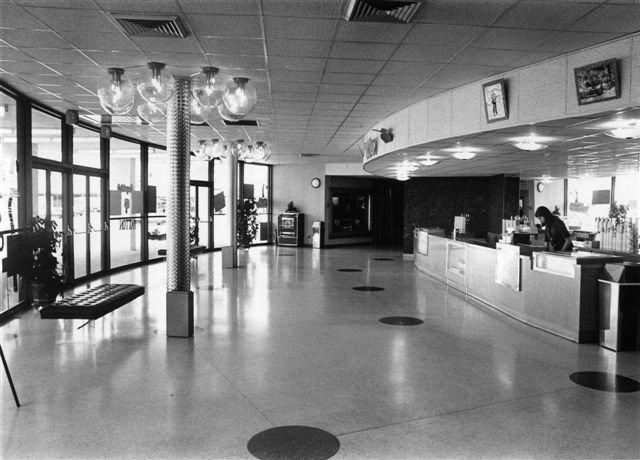 The UA Cinema 150 opened on August 21, 1978 with Jack Lemmon in “The Odd Couple”. It had an enormous dome roof and a 120 degree curved screen which was 70ft wide. In addition to standard 35mm, the theatre also showed 70mm and D-150 formats. When this happened, a large BLUE curvulon is used.

After years of service, the UA Cinema 150 closed in May 2003. This was the last operating Dimension 150 theatre in the country and represents another loss to that era of widescreen cinema.

The theatre reopened as a concert venue known as the Village in 2006. It was demolished in January 2015.

My Dad, Albert Campbell, was the projectionist at the UA Cinema 150 in 1970 when the local newspaper interviewed him and published the article. I have posted the pictures that were taken of the theatre for this interview. I was a senior in high school just after the article published and was very proud when a teacher inquired if that was my Dad. He began as an projectionist apprentice in the 1940’s and retired due to vision problems from diabetes in 1977….

marysgranddaughter: I knew your dad pretty well. He was the head projectionist at the old UA Four theater, back in ‘72, when I worked there. He was pretty cool, and used to let us visit the projection booth any time we wanted.

dcbohn: That is so cool…My Dad lived and breathed theatres. He was given a little red projector as a child, which I still have, although it’s not totally intact now. I am so glad to hear from you. Do you still live in LR?

marysgranddaughter: No, my job transferred me to Ohio, back in ‘91. I hardly ever go to the movies any more. It’s just not nearly as much fun as in 'the good ol’ days'.

This is great they saved this wonderful building. There was once a similar theatre in Seattle for years with the same screen and systems and they made it a weedfilled lot and now it is another huge generic highrise in a city rapidly loosing it soul and history. The screen in this 150 degree system is almost as awesome as Cinerama or Imax. The Cinerama theatre still exists in Seattle and has been updated and improved many times and just recently again. One of the most technically advanced theatres in the world. Was built around 1962 or 1963.

I saw the original Star Wars, Empire and Jedi at this theater as a kid. I moved from Little Rock long ago, but it’s sad to see it gone.

The August 21st, 1968 grand opening ad can be found in the photo section for this cinema.

There are lots of interesting stories about the UA Cinema 150. I worked for United Artists from 1969 until 1977, and then again from 1980 until 1986, in Conway, Morrilton and Arkadelphia, Arkansas. While I had many UA manager and employee friends in Little Rock, I never did work there.

The story goes that the real estate specialist for United Artists, Bob Bouchee (spelling?) was scouting Little Rock, in an effort to find the best location for a D-150 theatre. He saw the corner of Asher & University and said “This is it.” Unfortunately, the developer of the Village Shopping Center did not want a movie theatre in his project. As a result, United Artists purchased the entire shopping center and put the Cinema 150 there. At one point in time, it was suggested that the city offices for United Artists be placed in the center. United Artists had closed the Arkansas Theatre downtown and then needed another place to go. When someone suggested to then district manager Robin Wightman about the possibility, Wightman said, “Hell, we can’t afford the rent there!” So they located the offices behind the UA University Quartet Theatre across the street from the 150.

Another story concerns the construction of the 150. The construction was progressing nicely, when someone discovered that the architect had not included a project booth in his plans! So, one had to be added to the plans and engineers had to figure out how to complete the construction. That apparently was a problem, but they got it worked out.

The UA Cinema 150 was a gorgeous theatre and one that the film companies wanted to have their pictures screened there. It was also a favorite of movie patrons, great for dates and special occasions. I always enjoyed going there on my night off and watching a film. But my favorite theatre in Little Rock for watching movies was actually The Heights Theatre. I know it was a sad day when the 150 was razed.