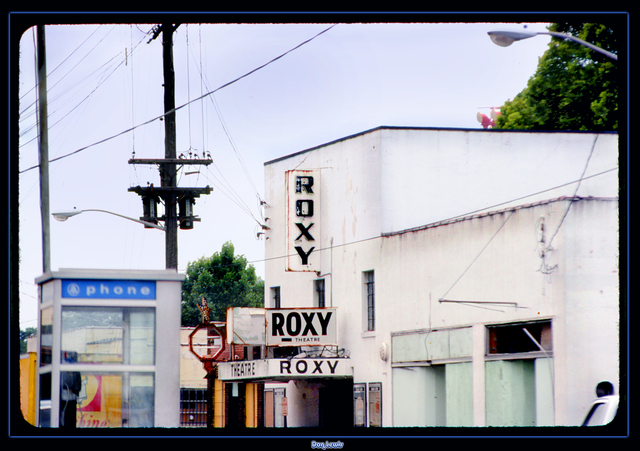 I discovered and photographed the Roxy Theatre in about 1984. It was a plain white building with a small vertical sign attached on the front spelling “Roxy” in black letters outlined with neon. It had two movie poster frames on each side of the entrance. It also had a small overhang over the entrance that said “Theatre” on the front and “Roxy” on the sides. It was showing pornographic movies at that time (according to the advertising) and was known as the Roxy Follies Theatre. It was in a dangerous part of Jacksonville.

I hated so badly to stay there at night all alone when I had to build up and break down movies.Beleave me I had every light on in the joint but anyway I was there one night and closed the place down to lock it up say oh about 1:00am and went in the booth and locked myself in to get things done and get the heck out of there and all of a sudden something or someone was trying to jimmy the booth door open but to no avail.This went on for about 5 minutes and they would not say anything and I ha about enough of this so I opened the door and no one was there.I checked the whole building (with a baseball bat) but to no avail.They sure did seem to be ticked off about it.

That’s creepy. Troy, do you have any pictures of the Roxy or any of the other theaters and drive ins you worked at? And more stories? Maybe Vaughn can get in on this too. What happened on the last day?

Lady Jester, where did you read the story? I’d like to find a copy of it.

I think vaughn does.Me and vaughn worked at the midway d.i.together.I think thats when that ghost went through him.

The scariest thing that ever happened at The Orange Park Five where I worked, was a hold-up and the dead woman they found in the bathroom (supposedly related to someone with the Lynyrd Skynyrd Band). In the robbery, they tied up the managers, two teenage girls who were cashiers and the maintenance/cleaning guy (he walked in on the holdup). The assistant manager literally ‘messed’ in his pants. Fortunately, no one was seriously hurt. They never arrested anyone for it. I don’t remember the details of the dead woman, but it freaked everybody out that she died in the women’s restroom at the theater. I believe that she had a heart attack.

I will never get over the fact that before we entered the building to start the day at about 12:00 noon,we could hear the movie running but when we entered it would shut down. Checked all doors,all is well. Go figure…..

It was very common for patrons to complain that a woman would sit beside them out of thin air and start talking about old movies that played there. I prescreened a movie one late night with witnesses and we had the same problem on a constant basis. Did she die there?

The correct address for this theatre is 2412 W. Beaver St.

Woops 32209. The theatre it self was only 45 feet wide by 200 feet long. The two buildings to the right of it used to be a motion picture production lab back in mid to late 60’s.It was American Productions inc. and they shot and edited movies such as “Fireball Jungle” starring John Russel.