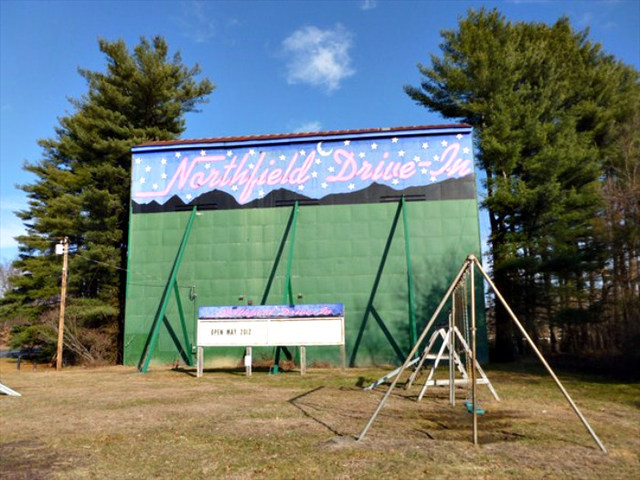 The Northfield Drive-In is located in this most northern point of Western Massachusetts. Actually, half is located in Massachusetts and half in New Hampshire. It was opened on August 3, 1948. During the Spring, Summer and early Fall seasons this theater exhibits first run double features. This is unique, since most drive-ins ran second run fare even during their heydays of the 1950’s and 1960’s. This is truly a treasure continuing the drive-in theater enjoyment of the past.

This drive-in appeared in the film “The Cider House Rules”.

The theater is actually ½ in Northfield MA and ½ in Hinsdale, NH. Not Vermont.

Seems like it is two different states,Property Taxes must be a pain the rear.

When the Northfield Drive-In opened this year they opened with digital projection. Read more on their website.

The DI had a break in 7-19-16. Here are the details of the break in and what was stolen.http://www.recorder.com/Northfield-Drive-In-looking-for-candy-thieves-3582419

I had always read that the Northfield straddled the border, but Google Maps shows the entire view field, screen and driveway on the NH side. Maybe the total acreage stretches into MA? Or Google Maps' border is wrong.

In the Theatre Catalogs, the Northfield first appeared in the 1949-50 edition as the Auto Th (later Auto DI) in Northfield MA, owner C. (Carl) Nilman, capacity 300, and it stayed like that through 1956.

The 1969-76 MPAs listed the Northfield Community in Northfield MA, capacity 400.

The 1982-88 MPAs listed the Northfield Drive In in Winchester NH, owned by Shakour, capacity 220. (The drive-in is closer to Winchester than Hinsdale as the crow flies, though the drive is a little longer.)

The drive-in’s history page says the Shakour family bought it in 1967, and that Mitchell Shakour is the current owner. And I wrote in 2014 that the Northfield ended its season that year with a wedding.