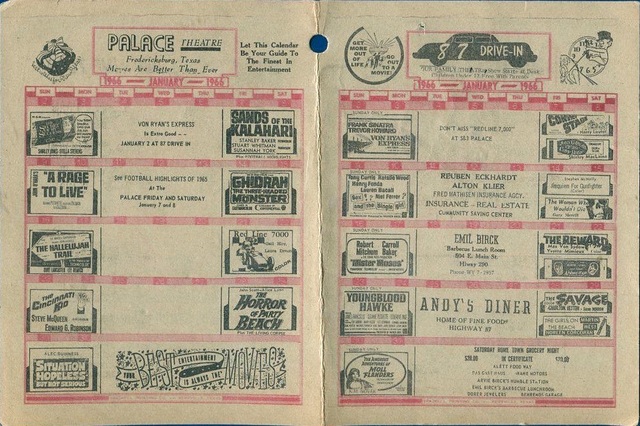 is this place for sale? if so how much? thanks

Once again Chuck thanks for the photos,it must have been cool to work there and live under the screen.

Drive-In is on US87 just south of Friendship Lane. at the Immel Dealership. Map isn’t even close.

Looks like the screen came down somewhere between 2008 and 2010. Only the ramps and a foundation are visible now.

BoxOffice, Feb. 22, 1960: “Sale of the Palace Theater and 87 Drive-In at Fredericksburg to Bel-Pad Corp. was announced by Carl and Herbert Durst, who owned the theatres for the last ten years. The new owners are Pat Padden, formerly of San Antonio, and Mr. and Mrs. Howard J. Bellamy, also of the Alamo City. The Durst brothers entered the theatre business when they erected the 87 Drive-In back in 1949. Four years later (1953), they purchased the Palace from Walter Knoche.”

The field is empty except for the concrete foundation of the area that was in front of the concession building with a railing on each end. The property is for sale.