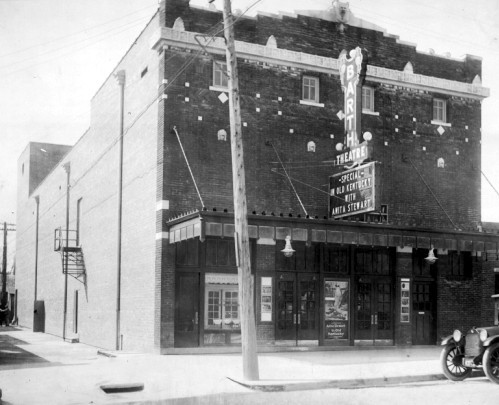 This early Carbondale theater was located on Monroe Street near Illinois Avenue. Originally known as the Barth Theater when it opened on March 1, 1920 with Wallace Beery in “Soldiers of Fortune”. It was remodeled and renamed Gem Theater on September 6, 1934. Following another renovation it was renamed Rodgers Theater on September 3, 1938. It was closed following a fire on February 23, 1959. It has been razed.

By the 1950 edition of F.D.Y.B, seating is given as 752, it was known as the Rogers Theater by then and the street address given is 207 Monroe St, Carbondale, IL.

Archives are incomplete, Opened as Rodgers before 1938 and closed in 1957.

Must have been great inside. Any pics someone?

No pics, but remember seeing “New Faces of 1952” there when I was at SIU in the mid 50s. Only place showing “art films” at the time.

Ed Barth had operated the Amuse-U and Yale Theatres in Carbondale before opening the much larger Barth Theatre on March 1, 1920 launching with “Soldiers of Fortune.” Gill & Faith Architects of Murphysboro drew the architectural plans. The theatre was updated becoming the Gem Theatre on September 6, 1934. On September 3, 1938, after yet another renovation, the theatre reopened as the Rodgers Theatre.

The theatre converted to widescreen to accommodate CinemaScope screenings in the 1950s. But business trailed off in the television era and business siphoned after the building of the Varsity Theatre which launched in 1956. The Rodgers turned to an art cinema in 1957 running until a fire on February 23, 1959 closed the theatre. The last film was “The Red and the Black.”