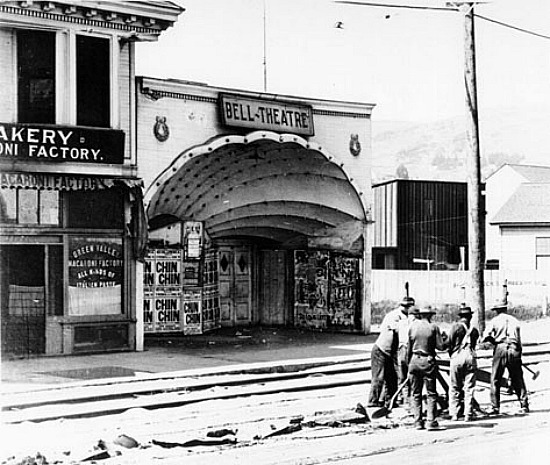 The Bell Theater was a silent-era theater that opened in 1911 as the Excelsior Theater. This theater closed around 1920.

Per Joe Vogel’s post on the Vallejo Bell theatre: The Cohn family (Gus Cohn) operated houses called the Bell Theatre in Oakland,San Francisco and Vallejo. There were two Bell Theatres in San Francisco. I came across a reference to the Bell Theatre on Market Street being destroyed in the 1906 fire, but the Bell that Gus Cohn was connected with in later years was on Mission Street.

vtowntheaters: I think misinterpreted some of the references I came across, and this Bell Theatre might not have been a Cohn house after all. The Bell Theatre on Market Street that was destroyed in the fire was rebuilt as the American Theatre, and items about the American in The Billboard in 1908 say that it was managed by Abe Cohn, who was Gus Cohn’s brother. It could be that the Bell on Market Street was the only San Francisco house the Cohns operated, and they still ran it after it was rebuilt but didn’t use the name Bell Theatre any more.

The Bell Theatre in Oakland was last listed in the city directory in 1912, and I found a 1912 reference to Abe Cohn which said he was “…formerly of the American Theatre…”, so I think the Cohns might have left the theater business around 1912. The Oakland Bell was converted into a grocery store operated by members of the Cohn family.