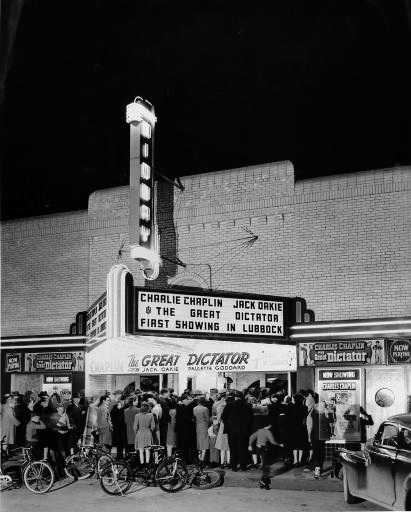 Opened as the Midway Theatre in 1940. In the early-1960s we would sneak into the Midway Theatre to see adult movies which were very tame compared to today’s fare. It was renamed Continental Fine Arts Cinema from October 28, 1964. It was renamed Bijou Theatre from November 24, 1976. It closed in 1977 and was converted into an apartment building which is currently in use.

The Midway Theatre was listed as seating 500 people.

B&W photo of the MIDWAY courtesy of the Texas Tech Library.

Photo at this new story in the Lubbock paper:

Thanks for posting above link Robert!

The Midway was a favorite with the Tech student crowd in the 1940s, according to my mother anyway. It was ‘midway’ between Tech and downtown. Beginning in the 1950s it changed names quite a few times—the Centre Theatre, the Gay Nineties, the Tejas, and finally the Varsity. I may have even missed a few names. When I was in college in the 60s, the theater had a deal with Tech to show foreign film festivals (like Ingmar Bergman films) and other ‘art’ and historical films to supplement some of the classes at Tech.

“Lubbock theater history is sketchy, but historian Lawrence Graves said Lubbock’s first movie theater, the Orpheum, opened in 1909. It lasted only one year but more theaters followed in the 1920s and ’30s, with most in the downtown area. At one point, Lubbock had 22 walk-ins and six drive-ins. The building at 1805 Broadway opened as the Midway Theater in 1940. As the theater changed hands, so did the name. The Midway later was the Centre, the Gay 90s, the El Tejas, the Varsity and the Continental in 1964. It was renamed the Bijou in 1976 and was converted into an apartment building in 1977. The photo (added) is not dated but “Cherokee Strip” was released in 1940. Perhaps the bicycles are from kids wanting to see “The 3 Stooges” for 9 cents! The time period was during World War II as evidenced by the pile of paper. Encouraged by the government, towns had paper drives, rubber drives and scrap metal drives for the war effort. People collected scrap paper so it could be used for packing around equipment and weapons.”