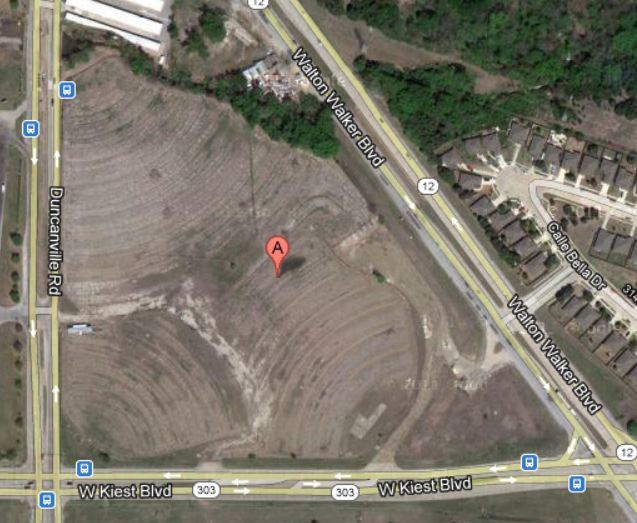 When it opened on October 2, 1968, the Astro Drive-In was the world’s first fully automated drive-in, but it became known for having the largest screen in the Western Hemisphere. The screen measured nine stories tall and was 140 feet wide.

Because of its size and unique character, the Astro Drive-In was often used as background for print advertisements, TV commercials, TV shows, and motion pictures filmed in Dallas/Fort Worth.

Since the Astro Drive-In was located about 7 miles directly south of Texas Stadium, the home stadium of the Dallas Cowboys, the theatre regularly hosted Cowboy players and their friends, as well as notable television and feature talent who were working on location in the Dallas area. They all seemed to enjoy the old time feel of the Astro Drive-In. A 3rd screen was added on August 16, 1969.

When “Grease” was re-released several years ago, the Astro Drive-In had the fifth-highest gross in the south, an impressive feat considering the grossing potential of modern multiplex theatres.

The Astro Drive-In was not far from other area theatres, two General Cinema theatres and a United Artists theatre. Many of the Astro’s patrons absolutely loved the idea that GCC and UA went out of business, but the Astro Drive-In continued to thrive.

Until it was destroyed by fire on the night before Thanksgiving in 1998, the Astro Drive-In was the last operating drive-in in the Dallas/Fort Worth area.

I went there to see Terminator 2 just for the experience. The sound was broadcast with a weak FM signal that we could just pick up in the car, and I remember it was so cold out that we had to run the engine for heat a couple of times. I went to the concession stand for a dog and Coke and was a bit disappointed when the girl nuked it for me, but it was still cool. A couple pulled up a few slots over in an early 50’s shoebox Ford and when they got out to smoke a cigarette I noticed he was dressed like James Dean, ducktail and all and she was wearing a poodle skirt. I assumed they were an older couple reliving their youth, but when a car pulled in and swept them with their head lights I noticed the couple could not have been more than 25 years old! They looked like they stepped right out of Rebel Without a Cause. I am sure they were real but that is the sort of thing that might make a guy think he was seeing ghosts. A memorable night and the last Drive-In I attended

There appears to to be trucks or transportable buildings on the site now? The fences are still there, and possibly the snack bar/bio box building!!?

Was it known how the fire started?

A sad note.. Richard (Rich) Peterson, who managed the Astro & the Casa Linda Theatre (Dallas Tx) passed away on May 24 2019. Rich was a super nice guy. I first met him during the demolishing of the Astro & closing of the Casa Linda. We’ve stayed in touch on & off ever since. I’m very saddened. Rich battled stage 4 cancer for 13 months, fighting all the way. He was a trouper! Rich will be missed by so many………… R.I.P. my friend.. I’ll remember our IHOP get togethers fondly..

I Feel Very Guilty On Some Photos I’ve Seen Throughout The Past 3 Years, Hoping The Photo Of A Movie That Featured A Few Scenes, One With The Man Facing The Opposite Direction To Where The Screen Faces Which Was Playing NSS’s On-The-Spot (1964) (Or Some People Called It A Jay Ward Flick-O As I Sometimes Call It), And Another Scene Featuring A Unknown Woody Woodpecker Cartoon (The One With The White Wood Title Card Background From The 1960’s, Not The Brown One From The Early 1970’s). I Darnly Forgot What That Film Is Called Anyway.

These Photos I’ve Discovered Belongs To The Astro, And Yes There Are Several Ones I Have To Look Over With Since It’s A Very Big Hotspot For Films Back Then.

Opened on 2/10/1968 on the north screen with “The lost continent” and “The vengeance of she” and on the south screen with “ The detective” and “Come spy with me”.

Opened as 3 screens on 16/8/1968 on screen 1 with “Goodbye Columbus” and “Georgy Girl” and on screen 2 with “The love god?” and “Death of a gunfighter” and on screen 3 with “The valley of Gwangi” and “Dracula rises from the grave”.